The world’s first baby spa: such a thing does indeed exist 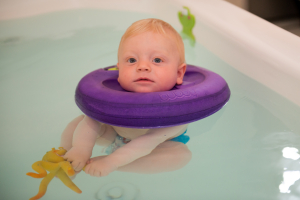 In what has been the hottest week of the year so far we’ve been keeping cool with a trip to the world’s first baby spa in Kensington. That’s right, such a thing does indeed exist, and here’s a picture of Little B to prove it. It’s run by 68-year-old infant swimming expert Laura Sevenus, who has been handling new-borns for more than 40 years and has an almost supernatural calming effect on babies.

Although the registration form asks you who your gynaecologist and paediatrician are (which is telling about the Kensington and Chelsea clientele – needless to say I left that bit blank), there’s nothing snooty about the spa at all.

It’s simply a friendly haven for babies from just two days old (and their mums). The spa uses hydrotherapy and a patented floating device – which is basically a giant purple doughnut placed around the baby’s neck – allowing them to explore their muscles’ strength and gently form their bone structure in purified water.

Afterwards they’re treated to a therapeutic massage using grapeseed oil while soothing music plays in the background for a complete sensory experience. I wish I’d known about this place when we were in the throes of colic.

The spa is really designed for new-borns and babies under six months old, but Little B (who is now eight months) absolutely adored his session and slept like a dream for several hours afterwards, which is unheard of during the day.

It was fitting, then, that Huggies chose the spa to launch their reformulated Pure baby wipes. They’ve had all of the nasties taken out of them – parabens, alcohol and phenoxyethenol, which basically means they’re as gentle as cotton wool and water, and unlike most wipes they’re made from natural absorbent fibres. 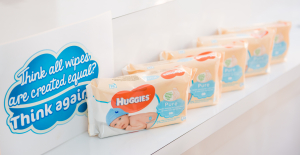 We learnt all about them alongside our fellow Huggies ambassadors and a team of experts including midwife Natalie and dermatologist Emma, who both debunked the guidelines that wipes shouldn’t be used from birth because these are so natural.

I’d never really given much thought to baby wipes until I was asked to become a Huggies mumbassador.

Like many mums I was driven by price, automatically opting for supermarket own label ‘5 for £3’ deals. I’d only have reached for the branded option if they were on offer, or if I was in a service station and desperate.

I’ve now learned that you get what you pay for, and opting for the cheapest option isn’t necessarily cheaper in the long run. Since we’ve been using our Huggies Pure wipes we’ve been going through them at literally half the rate of our old ones: where I’d use fist fulls to clean up a poonami, I need one, possibly two, of the Huggies ones.

You can also use both sides – whatever I was mopping up with my old wipes would soak through, but these ones are so absorbent you can turn them round and use the other side (although I wouldn’t recommend this for the aforementioned poonami, not because the wipes can’t cope, but because you’d get it all over your hands).

Also, they don’t leave that horrible oily residue on your skin. In fact there’s no residue left at all. Which makes me wonder what on earth is in the old ones.

It’s probably best not to think about it…

To be in with the chance of winning a year’s supply of Huggies baby wipes, a £500 Asda gift card and a Disney Hamper click here