The REAL difference between being a mum & being a dad 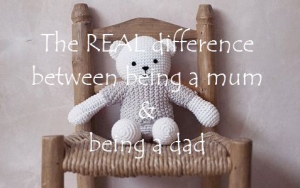 Obviously there’s a difference between being a mum and being a dad. Like the small matter of growing a baby and magically producing it nine months later.

But after going out for breakfast at the weekend (the child benefit had hit the joint account – don’t judge me, I needed to break out) it occurred to me – when the food arrived and Misery Guts happily tucked in while I strapped Little B into the high chair and cut up BB’s sausage, my own food untouched – that being a mum and being a dad are different in ways I’d never anticipated.

When a plate of food is put in front of Misery Guts he will start eating it, regardless of whether the children need help with theirs first. Occasionally he will notice, five minutes in when I’m clattering cutlery and giving him a pointed look, that I haven’t started mine yet but more often than not he’s completely oblivious. I’ve given up saying anything – instead I rant in silent fury inside my head.

Forget lying in the bath with a face mask on or having a long hot shower: washing is now all about getting clean in the fastest possible time without the toddler putting the entire loo roll down the toilet or felt penning the hall wall. Misery Guts, on the other hand, somehow still manages to have enough time to read a book in the bath, just like he did before. Passing the slightly open door and catching him turning a page makes me want to scream.

I used to do my hair and wear make up every day of the week and I had a wardrobe featuring a wide array of different clothes which I would peruse and choose according to my mood. Those clothes now hang untouched in favour of nursing vests and easy-access tops, and I manage to do my hair and wear makeup once, possibly twice a week. Misery Guts hasn’t had to alter his wardrobe at all and takes the same amount of time getting ready as he did before. Infuriatingly, he also looks better: while I’m counting new grey hairs on a weekly basis he’s not ageing at nearly the same rate. It’s so unfair.

If I’ve been out at work all day, the first thing I do when I get home is assess what needs to be done next. Usually it’s the dinner, then washing, then tidying up, then thinking what needs to be prepped for the next day. When Misery Guts gets home from work he gets a snack from the fridge and sits down on the sofa.

I feel like a stuck record banging on about sleep – or lack of it. I know mums are supposed to be hormonally wired to wake up at the slightest cough or sniffle while dads sleep through but GIVE ME STRENGTH. Little B can be standing in his cot, right next to our bed, his face puce with crying, and Misery Guts won’t stir.

I realise I may be being grossly unfair to other dads out there, especially stay at home ones, and also to households with two mummies and two daddies, where I’m sure the dynamics are different. But this is how things are in our house. What’s it like in yours?