The midwife recorded the time of birth on kitchen roll 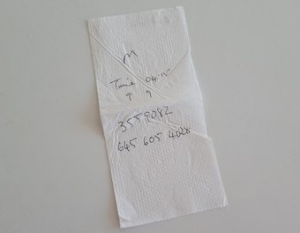 This week I’ve been sorting through Little B’s memory box and with BB now at school I’ve finally got around to collating things in his early years journal. As well as the obligatory scan pictures and hospital name tags I came across a piece of kitchen roll scrawled with letters and numbers in black biro.

Believe it or not, this dog-eared piece of tissue marks Little B’s official entrance to the world: he came so fast the midwife recorded the time of birth on kitchen roll.

Don’t worry; we weren’t in a kitchen or anything like that. We were in hospital but it happened so fast. You know when you just know it’s time to go to hospital – well that happened so off we went. We arrived at around 2am where a midwife told me I was just two centimetres dilated. Two! I was convinced I was at least six or seven.

Seeing the look of disappointment on my face she suggested we wait in triage for an hour or so to ‘see what happened’ because they couldn’t admit me until I was at least three or four. I was begging for pain relief – all I wanted was to get into a birthing pool – and at around 3am they agreed and started running the bath.

Despite having carefully packed bikini bottoms and a tankini at the top of my bag because I knew I’d need them first I forgot all about that. I stripped off as I walked through the door and got straight into the lovely warm water even though the pool wasn’t full yet. It was bliss! I lay on my back and floated, letting the water ease the pain, and suddenly there was the overwhelming urge to push.

Misery Guts had to go looking for the midwives and they came running – they’d expected me to be in labour for a lot longer – and Little B was born at 4.15am, just two hours after we arrived at hospital and an hour after I got into the pool.

My notes were still in triage on the floor below so our midwife wrote the details down on a piece of kitchen roll that was lying on the window sill. M for male at 4.15am. I’ve got no idea what the other numbers mean. 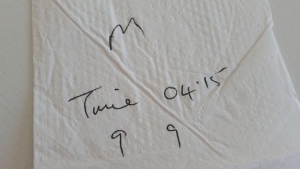 Later on, as we were getting ready to leave the birthing suite, I spotted the kitchen roll back on the window sill and asked if I could take it home. 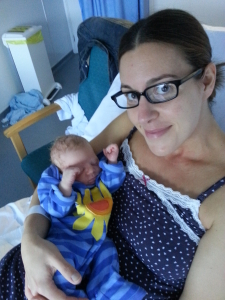 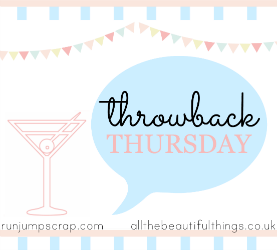