Is ‘me-ternity’ leave a good idea?

Have you heard the one about the woman who reckons women who don’t have children should be entitled to ‘me-ternity’ leave in order to have the equivalent time ‘off’ work as their child-bearing colleagues?

I’m loath to give her too much air time, but basically author Meghann Foye has written a book about a woman who pretends to be pregnant so she can take some time off, called – you guessed it – Meternity.

Needless to say she’s had a roasting in the media – and she’s about to get another one from me. 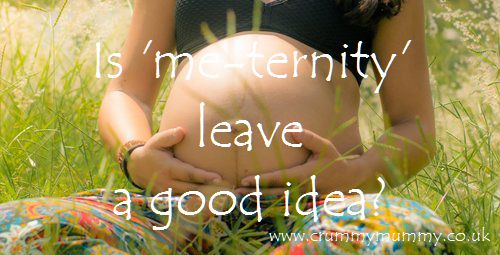 But quite apart from the fact it’s ridiculous, what annoys me most is that the idea not only completely ignores the fact the early weeks and months of maternity leave are spent physically recovering from producing another human being, it yet again reinforces the idea that by taking time out of a career to have a baby women are taking the easy option, shirking ‘real’ work in favour of indulging in motherhood and sitting around all day eating cake.

Why is it parenthood is portrayed in this light? Like those divorce headlines which critically imply a wife is ‘getting’ half of her husband’s fortune. No she isn’t. She’s getting half of their fortune, the fortune earned while he was out working and she was doing all that was needed to enable that to happen, like ferrying their children to and from school and clubs at all hours of the day, keeping the fridge stocked and cleaning his wee from the toilet bowl. It’s called team work.

They’re not her children, they’re their children. And if that team breaks down I think it’s right that any proceeds are shared equally, particularly if one partner has put their own career on hold to make it work. Anyway, I digress. Back to ‘me-ternity’ leave…

I’ve said it before and I’ll say it again: mums and dads on maternity and shared parental leave are raising the politicians, teachers and doctors of the future, and what job can be more important than that?

And they’re not only raising children for the ‘important’ jobs either, they’re raising the care workers who will one day wipe the bums of people like Meghann Foye, and the bus drivers who will lower the doors of the bus because they’re too old and infirm to climb into it by themselves. Because someone’s got to do it.

Anyone who thinks maternity leave is a ‘break’ needs their head read. Misery Guts regularly hot foots it to the office on a Monday morning to escape the horror of the weekend, and frankly I don’t blame him. I have many friends who say returning to work after a maternity leave felt like a break, where they could focus on and complete one task at a time, wee in peace and drink hot tea without fear of being puked or pooed on, or both.

Of course I don’t want to poo-poo the idea entirely. If there’s ever the chance of ‘me-ternity’ leave while actually on maternity leave, I’m all ears.

What do you think? Is ‘me-ternity’ leave a good idea? Or does the concept wind you up like me?

🤗 Hugs 🤗 So hugs are officially back on the

When your bestie gets a new set of wheels 🚲 Thi