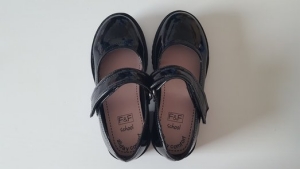 I was planning to wait until the last week of August to buy BB’s school shoes in order to get the most out of them, but last week the woman in Clarks sagely warned me that this would be a Big Mistake.

Apparently the last week in August is ‘absolute chaos’ and I’ll have a ‘meltdown’ – those were her actual words. She’s been measuring BB’s feet for almost three years now and being in her early 60s she looks like she’s got several back-to-school seasons under her belt, so I’ll take her word for it.

I had no idea school shoes are so expensive! At Clarks you’re looking at £30 or more per pair, and given that BB’s feet have shot up from a size eight to nine and a half in the last month this could become a pricey business.

Still reeling from the price tag I muttered something about ‘coming back later’ and we headed to Tesco before going home, where, among the loo roll and bin bags, a back-to-school aisle has appeared with, you guessed it, shoes. And they’re half the price of Clarks.

The question is: why are they half the price? Because Tesco is taking over the world and can produce so many they can afford to sell them so cheaply, or because they are actually half as good as the shoe shop ones?

On closer inspection both have a rubber sole, Velcro straps and are ‘scuff resistant’. But supermarket shoes don’t come in widths and I’ve got this (completely unfounded) notion they’ll be ‘bad’ for BB’s feet.

We’re going to be part bussing and part walking the afternoon school run, so I don’t want shoes that are going to harm her feet in any way – she is actually going to be walking in them and not just dropped off and picked up from the school gate.

But if her feet shoot up another size and half before the end of term the thought of shelling out another £30 is a bit much. So at £14 a pair we’ve opted for the supermarket shoes.

Whether they’ll last as long as Clarks ones remains to be seen, but at the rate she’s growing we may never know, in which case it’ll be neither here nor there.