Summer days out with the kids #2: Whitstable Oyster Festival, Kent 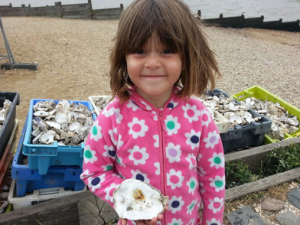 You’d think a love of oysters would be a prerequisite for visiting an oyster festival. It’s not. I hate oysters. I mean I really hate them – I’ve tried them once, twice, three times and it’s still not happening.

Even so I had a ball when we went to Whitstable’s annual oyster festival last weekend, where there’s something for all the family. So here’s my second suggestion for a summer day out with the kids and I highly recommend a visit if you’re anywhere nearby:

What: A week-long festival in the seaside town of Whitstable featuring free events including a tug-of-war, stalls, bars, restaurants, fireworks and of course oysters
Where: Whitstable, Kent
How much: Free, although you’ll need plenty of cash for the stalls (and bars)

I’d never been to Whitstable before so this was a first for me, and it’s not what I expected at all. I’d imagined a faded seaside town with old-fashioned shops and peeling paint like Hastings or Weymouth, but instead found a buzzing hub with trendy shops (I found a dress with pugs on!) and beautifully kept seaside houses dripping with hanging baskets.

The festival is now in its 31st year and is a celebration of the town’s heritage and famous oysters, which now have PGI (protected geographical indication) status. The oyster beds run the length of the coast line and there are piles of old shells everywhere which they use to cultivate new oysters.

There are different events on each day of the festival – we saw the tug of war in which teams of fancy-dressed locals competed on the sand – plus a main tent where oysters and a plethora of other food and drink is served as various bands play (BB loved dancing – so memorable was her performance that a woman in a shop recognised her the following day!) The whole harbour is full of stalls selling everything from seafood and ice cream to art and olives. 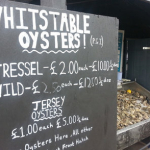 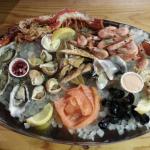 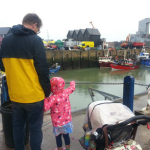 We decided to make the trip into a mini-break and stayed the night in a 150-year-old converted fisherman’s hut on the seafront. In terms of novelty factor it gets 10 out of 10. With two single beds and a kitchenette downstairs and a double bed, bathroom and living area upstairs accessed by a steep ladder/stair configuration, it was perfect for our family of four with views out to Whitstable Oyster Company’s oyster beds. 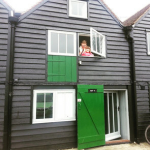 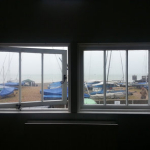 The stair thing was a bit of an issue as far as Little B was concerned, but we just blocked the living area with his travel cot so he couldn’t crawl over and fall down. Then we ate fish and chips out of the wrapper and chatted.

It was the perfect weekend getaway and all very idyllic until the very end, when Little B did a poonami which leaked. Not on the wooden floor where I could have wiped it up easily. Oh no. On the rather smart hessian rug where it stuck in the ridges. Then due to the aforementioned blocking of the living area with the travel cot, in his haste to get to the bathroom to deal with it Misery Guts climbed across the bed, treading poo over the linen with every step.

Of course we ‘fessed up when we checked out, to a rather horrified looking receptionist (she can’t have had kids yet). It’s fair to say it was back down to earth with a bump, but you can’t have everything, can you?

The festival takes place every year at the end of July and beginning of August – dates for 2016 have yet to be confirmed.

My top tip: Head to Ossie’s fish and chip shop in Tankerton Road – they gave us a little cone of chips to eat while we were waiting and an extra piece of cod to take home.