How do you stop co-sleeping?

How do you stop co-sleeping? Google it and you’ll find pages of advice for newborns up to teens which is all very well, but how do you make it work for you?

We have (unwittingly) found ourselves co-sleeping with Little B for almost two years owing to the fact he was breastfed and when he outgrew the bedside crib moving him into our bed was so much easier than me being up and down like a yo-yo all night. 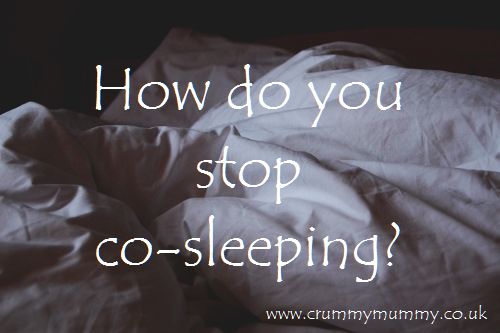 But then I discovered I was expecting baby number three, and having no intention of breastfeeding a two-and-a-half-year-old and a newborn at the same time it was time to stop breastfeeding Little B and get our bed back for six months before the new baby arrives.

They were two equally big hurdles to overcome (I’ll blog about the breastfeeding bit later) and a shock to poor Little B’s routine, so here’s what we did:

How we (finally) stopped co-sleeping

1. Move out. I don’t mean actually move out, I mean move out of the bed you’re sharing with the child in question. The chances are they favour sleeping snuggled up to or in the arms of one parent – in our case that was me as I was the milk bar – so you need to break the sleep association. I moved into the living room, while Misery Guts stayed in our bedroom with Little B. (And yes, it was absolute bliss by the way – a whole bed to myself with uninterrupted sleep for the first time in almost two years!)

2. Establish a new routine. I have always fed Little B to sleep (just one thing in a long list of so-called ‘negative sleep associations’ we’d managed to cultivate) so we needed to break the habit by establishing a new routine. For us this is bath, book and bed, with a beaker of milk with the book instead of boob.

3. Slowly slowly catchee monkey. Moving Little B out of our bed and into his own in another room overnight seemed like it would have been too much change in one go. Instead, with me out of the way in the living room, Misery Guts started putting him to sleep in his cot, but right next to our bed. After two weeks of doing this, we moved the cot into his own room.

4. Arm yourself with the best bedtime gadget you can get your hands on in order to distract them. We’ve got a BT 7500 Lightshow baby monitor, which comes with 19 lullabies as well as white noise, nature and womb sounds and a lightshow which projects coloured stars, moons and planets onto the bedroom ceiling. 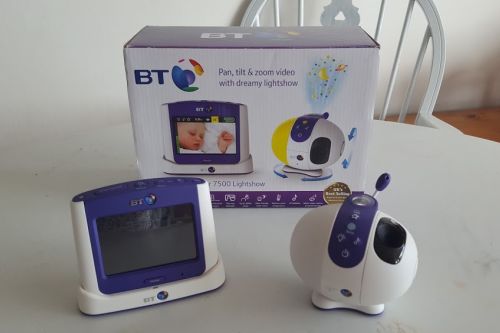 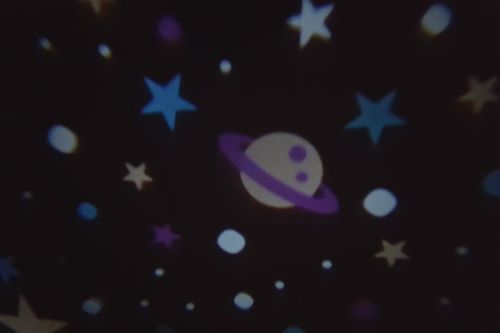 We started using it the first night we moved Little B into his own room, and I really do think it’s helped to settle him into his new routine and reinforced the fact it’s bedtime.

With a 300m range there’s a pan, tilt and zoom camera fitted to the music and lightshow monitor, so you can watch what’s going on in the bedroom via a separate touchscreen video monitor (you can actually connect up to four cameras, so you can watch several children at once or have different cameras in different rooms of the house). 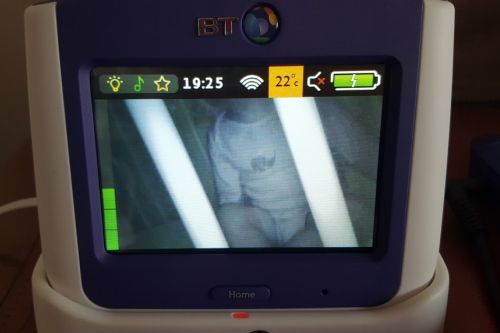 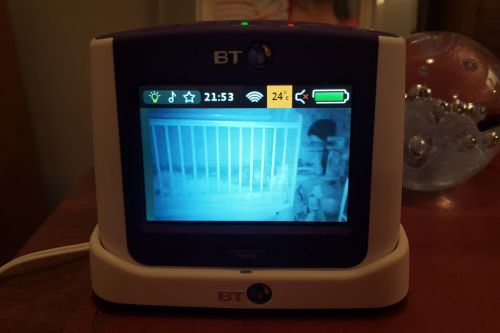 This is great if you’re doing controlled crying and leaving them to it for a little while as you establish the new routine (if you’ve just taken a sharp intake of breath don’t judge me) as you can see exactly what’s going on, and there’s two-way talk back so you can chat to and soothe them through the monitor too.

As well as measuring the temperature of the room there’s a timer for feeds and a ‘cry alert’ – although you can turn this off and switch it to mute (a must-have function for me!) At £149.98 it’s not the cheapest gadget of its kind out there, but it’s a nifty piece of equipment (Misery Guts loves fiddling with it) which does everything you can think of, and will last from babyhood to toddlerhood – even beyond.

5. Be consistent. Do not, under any circumstances, allow them back into your bed. Not even once. Even if it’s 3am, you’re exhausted, you just want to go back to sleep and can’t face lying on the floor next to the cot for another hour DON’T DO IT! There’s no point going through steps 1-4 only to undermine it all in a weak moment.

So that’s what we’ve been doing over the last month or so, and we’re finally cracking it. Of course some nights are better than others, but overall I think we’re winning.

Did you co-sleep and do you have any top tips for stopping? How did you get your little one to sleep in a cot in their own room when they were a baby?

We were sent the BT 7500 Lightshow baby monitor free of charge for the purpose of review. As always all opinions are my own and based on my own honest experience.