Shame on you John Lewis 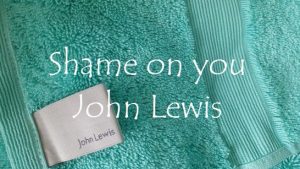 Have you heard about the mum who was frog-marched out of a John Lewis store because her toddler had a tantrum? Admittedly frog-marched is a slight exaggeration, but she was ‘asked to leave’ John Lewis in Dumplington (that is a real place, I checked) owing to the fact her 16-month-old daughter ‘started to lose the plot’ (the mother’s words, not mine).

As the mother of a 16-month-old myself, I feel her pain. It turns out it was midday (= lunchtime and therefore the child was probably hungry) on the Saturday before Mother’s Day (= the air was probably charged with a lethal mix of stressed dads and over excited kids). I’m not surprised the child started to lose the plot. I certainly would.

What I think is a real shame is that all this happened in John Lewis, a business founded on the revolutionary idea of a partnership uniting bosses with the masses that would ‘put the happiness of its employees at the heart of everything it did’ (their actual words).

Of course the whole hoo-ha is all down to the (ill judged) actions of one single employee, as these things always are, but we’re not talking about a hapless Saturday  person who didn’t know any better: these were the actions of a manager who presumably has had some form of training in What Not To Say To Your Customers.

No doubt his head has rolled by now, but the whole thing has left a sour taste in my mouth. I expected more of John Lewis, which prides itself on its customer service, and which I’ve always thought of as setting standards (the bathroom department is my favourite bit – all those Egyptian cotton towels in every colour you can possibly think of).

Anyone with a toddler will know you’re absolutely powerless if they decide to throw a strop when you’re out and about, planking as you’re desperately trying to ram them into the pushchair and get the hell out as soon as possible. You can feel the eyes burning into you, the exchanged looks, the disapproval on the faces of people who have clearly never had to deal with such a situation.

And then the ultimate shame: to be asked to leave when you’d clearly rather be anywhere else than there.

Shame on you John Lewis.

Has your toddler ever had a major public meltdown? What did you do?

I've got a confession: I love this man to the moon