Running in pregnancy: I made it to 36 weeks 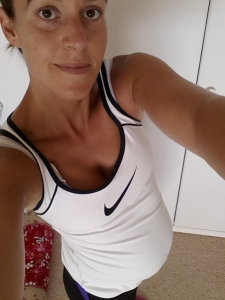 It is with the greatest regret that I have finally admitted defeat and hung up my running trainers. I made it to 36 weeks, running an average of 8 -10 miles a week, but after the baby’s head engaged enough is enough. Quite simply, it feels too weird.

Like my pregnancy with BB, running with a baby on board has been an experience. It’s been fun, sometimes hard but always exhilarating. In the beginning it was one of the best cures for morning sickness – the endorphins released afterwards overrode nausea for several hours at least – and by the end people I regularly pass have gone from completely ignoring me to smiling, saying hello and later offering words of encouragement.

I’ve even made friends with a homeless man who shouts ‘how many weeks to go now?’ as I jog by.

And unlike my pregnancy with BB, running with a baby on board has been easier this time. I’m not sure if this is because I’ve done it before and therefore knew what to expect – and how to adapt – or owing to the fact that this baby isn’t wedged firmly over my bladder. Either way, I’m sorry we won’t be running together again.

I used to like imagining the extra blood my increased heart rate would pump through him or her, taking lots of lovely fresh oxygen with it, which always helped to establish my pace and remind me not to push things too hard.

But over the last few weeks it’s taken longer and longer to physically recover from each run and I can literally feel my muscles becoming softer as relaxin – the hormone that allows the pelvis to expand and the body become looser – takes over. So rather than risk an injury at this stage, it’s time to call it a day.

As a result there seem to be runners everywhere I look, and I’m filled with envy as they spring along past me. It’s only been a week but I can’t wait to get back out there. I vividly recall my first run after BB was born – without my bump I actually felt like I was flying, a feeling which lasted for several months.

But I’ll have to be patient, which isn’t one of my virtues. Alas, the swimming pool and pregnancy yoga it is from here on in…