Routine for babies: just how important is it? 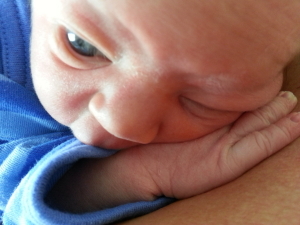 I’m feeling like a really crummy mummy this week. First there was the whole ‘brexting’ thing, now we’ve had the first of Little B’s ‘settling in’ sessions before he starts nursery, which involved me taking him to the baby unit for the first time to play for an hour or so.

As soon as we arrived he was quite clearly petrified: he took one look at the other babies and staff and clung to me with a look of horror on his face. It was only then that I realised he’d never actually been in a room with this many babies before.

With BB we did Rhyme Time this and Bumps n Babes that owing to the fact I was able to take the full year off (why do they call it that? It’s anything but ‘off’!) but with Little B, with the exception of Puddle Ducks which we did for six months but can no longer afford, I’ve done a grand total of zero classes. All this suddenly dawned on me and I was instantly flooded with guilt.

It took a good 10 minutes but he eventually let go and started exploring, at which point I sat down with the nursery manager to go through his routine. Or lack of it.

She then asked about his morning nap, at which point I revealed he doesn’t necessarily have one. She quite rightly said he’s likely to get very tired with all the new stimulation etcetera and suggested they could establish a routine for me, so IF he were to sleep, where does he usually nap?

I had to admit if he does have one it’s either because he’s fallen asleep on the boob or because we’ve gone out somewhere in the pushchair.

‘So you don’t put him down in the cot in the day?’ She asked.

I didn’t have the guts to reveal we’ve never managed to get him to sleep in a cot at all.

I suggested we could just see how it goes and if he looks tired and starts rubbing his eyes perhaps he could sleep ‘on the go’ in the playroom.

At the end of this questioning she asked me to read over the form and sign it, and I realised how vague his routine is. But how important is routine for babies really?

With BB I read Gina Ford cover to cover and while I didn’t agree with everything, we did employ a lot of the principles. But quite frankly the approach of scheduling everything at specific times left me feeling like I was a prisoner to the dratted routine, which was stuck to the fridge and updated as she grew, and this time round I just wanted to enjoy my baby without any ‘rules’.

So goodness knows what the nursery manager thinks of me. Hopefully that I’m pretty easy going and not one of those mums who arrives with a list and insists everything is done to the letter and to the minute.

Either that, or that I’m completely useless.