Reflections on Britmums Live: Rome wasn’t built in a day 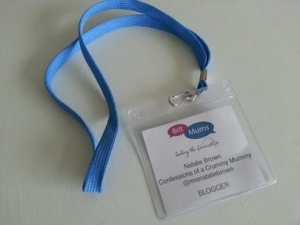 I think it’s fair to say our first Britmums Live was a success. Despite being just a teeny tiny bit scared, within two minutes of arriving I had already bumped into three people I knew and forgotten my worries altogether.

It was so nice to put faces to names at long last, and Little B was as good as gold (apart from smashing a glass jar of tea spoons while I took a picture of some champagne jelly, and apart from crawling over and untying an unsuspecting man’s shoelace during one of the sessions). He even made a new friend in the form of Life With Pink Princesses’ P3.

I’m amazed at what good value for money the event is; there were a plethora of experts on hand and it was hard to choose which sessions to attend and which to miss. I’d thoroughly recommend it for anyone considering going next year.

There was so much information to take in it felt overwhelming at times, but I’ve got it all written down, ready to work through and put into action. I feel fired up with new ideas and have even been dreaming about search engine optimisation and keywords to take the blog to the next level.

I was also overwhelmed listening to seasoned bloggers such as A Mummy Too’s Emily Leary, English Mum’s Becky Wiggins, Knackered Mothers’ Wine Club’s Helen McGinn and Deliciously Ella’s Ella Woodward talking about how they do it, and it made me realise how much work I’ve got to do if I want to be blogging at the same level.

But Rome wasn’t built in a day. Apparently they were laying bricks hour by hour…