‘She projectile vomited all over the donkey’

That’s right people, just minutes before her drama club Christmas show was due to start BB projectile vomited all over the donkey. And it wasn’t a pretend donkey either – it was a fellow classmate. 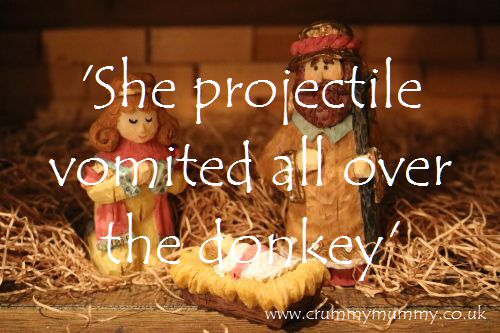 Let me set the scene: after more than a month of rehearsals BB and her classmates were lined up on the school stage in front of a hall packed with expectant parents, teachers and fellow pupils.

Dressed in matching red dresses (most of which had been bought especially for the occasion – what a waste of £22 quid that was) they were all set to go when It Happened.

After stifling what looked like a yawn BB turned a strange shade of yellow, lurched forward and threw up all over the stage. And the donkey. And the poor souls (in their new red dresses) on either side of her.

The only thing worse than having sick on your dress is when it’s someone else’s.

I saw all this in slow motion from my place in the audience but was barred from jumping up on stage to help owing to an unfortunately placed bric-a-brac stall that was in the way, so it was some minutes before I made it to the scene of the crime. Or vomit.

It wasn’t a pretty sight. To be fair BB had been complaining of feeling ill that morning, but we put it down to nerves and didn’t take it too seriously. That’ll teach us.

All this happened about 10 days ago, but I was too traumatised to find it funny – or write about it – for the first week.

Apart from feeling guilty for taking her in the first place, my fear is that this will become a defining moment in her primary school career.

I do hope she won’t be remembered as the girl who chucked up on stage and ruined the Christmas show. We were practically trending on year one’s Facebook page afterwards.

On the up side, hopefully this means the worst has happened and her actual nativity play, which is today, will pass without incident.

What can possibly go wrong? Watch this space and I’ll report back on Friday!

Have you ever been party to any school play mishaps? I’d love to hear your stories!