Is your partner making you fat? 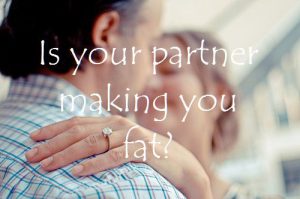 I’ve come to the conclusion that mine is. After stepping on the scales for the first time in yonks I’ve made the horrifying discovery that I’ve put on a stone in weight since this time last year. A stone! And it’s all Misery Guts’s fault. (It really is).

He’s not one of those feeder types you read about. It’s all because he decided to follow a Paleo diet, which basically means you ditch starchy carbohydrates and eat a high protein, high fat diet. Because it was easier and neither of us wanted to produce two sets of dinners I’ve inadvertently been following the diet too, but because I’m breast feeding and you’re not supposed to cut out whole food groups I’ve been having carbs on the side. And therein lies the problem.

To make sure I’m producing enough milk for Little B I’ve either been having rice or noodles AND the high protein, high fat meal, or having the meal but then filling up on other things between meals because of that Raging Hunger you get when breastfeeding.

On the upside, it would appear I’m not the only one. According to one study I read 62% of people gain six kilos or more after starting a relationship because when both partners feel comfortable standards start to slide. So technically I’m average. The only thing is my relationship is 15 years old.

The good news is there’s something we can do about it. According to the Huffington Post the way to fight relationship weight gain is to turn your relationship into an ‘active romance’.

1. Swapping date night dinner and a movie for something more active, like walking. (The writer suggests battlefields. Yes, you did read correctly).

2. Cook a healthy meal together at home instead of eating out.

3. Go bowling together for a workout.

The trouble is there aren’t any battlefields near us, cooking is the root of the problem and I hate bowling. So I’m going to do what I should have done in the first place and stick to what I’ve always eaten instead of going to extremes – a healthy mix of carbohydrates, protein and fat. Like my all time staple sushi, which lately has been reserved for special occasions due to its white rice and sugar content. With a bit of wine. And chocolate. And possibly a bit more wine.

Have you ever found yourself in a similar situation? Is your partner making you fat? And do you eat different meals, or the same meals? I’d love to hear what works for you!