An open letter to Santa

After starting the week with a rant about why I don’t want to see anyone this Christmas followed by annoying things they don’t tell you about Christmas with kids (I can’t wait until there’s no more advent calendar foil to extricate from the carpet), I thought I might as well continue in the same grumpy vein and end the week with an open letter to Santa.

I’m blaming pregnancy hormones. And being ill. And still having lots to do. 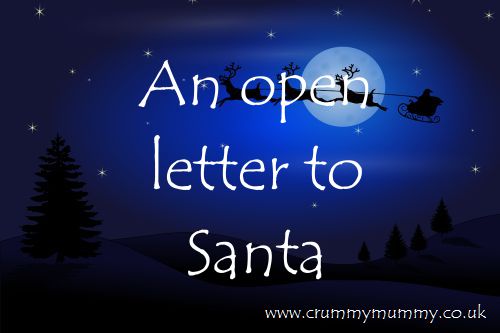 All BB wants for Christmas is her two front teeth (I’m so jealous she can legitimately sing that song – I so wanted a double gap at Christmas when I was little and it never happened, but I digress…) and all I want is to lie face down on the sofa for three days.

Which I can’t, owing to all the things there are still left to do and the small matter of a rather large bump, but again I digress…

An open letter to Santa 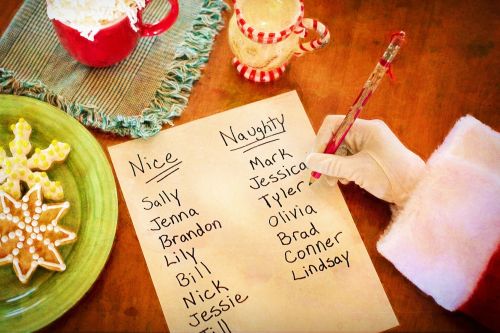 Despite careful planning – much of which has admittedly only taken place in my head – it turns out I’m not quite ready for Christmas. If at all.

So I thought I’d write you a little letter, which is actually more of a plea, because you’re the only one I can think of who might be able to save the day.

I haven’t finished Christmas shopping – to be honest I’ve barely started – and nothing’s wrapped either, unless the shop could do it for me. I haven’t done the food shop and I haven’t done the cleaning, and as for the washing – let’s just not go there.

Frankly it’s all a bit of a mess and I was wondering, given I’ve been such a good girl all year, whether you might be able to work the teeniest, tiniest bit of Christmas magic?

I don’t suppose I could sneak our Christmas cards onto your sleigh could I? They’re not actually written yet, but I was hoping you might be able to rustle up a magic pen. Or perhaps we could say they were written in invisible ink…

And I’m afraid to say homemade mince pies are looking increasingly unlikely – I’ve got the Jus-Rol and the mincemeat, but it’s the putting them together that’s the problem. If it comes to shop bought do you have a preference? Will Kevin the Carrot’s offering from Aldi do, or does it have to be M&S?

Any help and advice would be greatly, greatly appreciated.

Are you all ready for Christmas? Or have you still got to cram weeks’ worth of planning into a couple of days like me?