Ok so it wasn’t exactly a date, owing to the fact I was on my own, and Hugh Grant wasn’t actually there. But as an old editor of mine once said, never let the truth get in the way of a good story so let’s not get bogged down with the details.

This week I got the chance to see a sneak preview of Hugh’s latest film at an exclusive preview for Mumsnetters. I don’t get out much, so when Mumsnet invited me to the private screening of Florence Foster Jenkins a week before it’s general release I didn’t need asking twice, if only for the prospect of a few hours child-free. 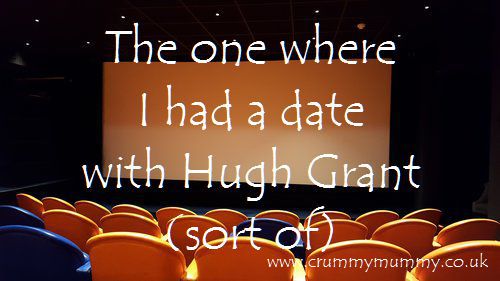 If you haven’t heard of the film it’s based on the true story of American heiress Florence Foster Jenkins, who relentlessly pursued her dream of becoming a great singer, even though she couldn’t actually sing.

Meryl Streep is Florence and Hugh Grant plays her husband and manager St Clair Bayfield, who does his best to protect her from the harsh truth: that her voice bears a striking resemblance to a cat being strangled.

And like in Bridget Jones, he plays a bit of a shit. I’m sure the real life Hugh Grant is perfectly charming (my brother recently ‘nicked’ a parking space from him outside an Oddbins and there were no fisticuffs) and indeed he was perfectly charming in the film, but there was also something Daniel Cleaver-ish about him. 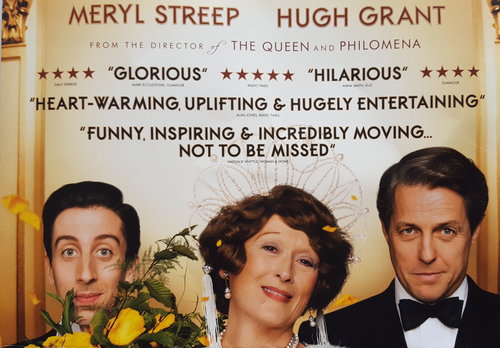 I won’t go into too much detail as I don’t want to spoil it in case you plan to see the film, but, as my granny would say, Florence and her husband don’t ‘lie down’ together.

As a result, they have an ‘understanding’ and he has a bit on the side, which basically means he gets to have his cake and eat it – a rich wife meaning he wants for nothing, while at the same time living it up with his girlfriend.

But the film is about much more than that – it’s a heart-warming tale about one woman’s steely determination to realise her dream, and a reminder that we should all do things we enjoy even if we’re not very good at them.

Like trying new recipes even though the last three were a disaster. (Substituting quark for white sauce is not a good idea, and too much banana in muffins will make them turn black).

And despite being a bit of a shit, I think Hugh Grant (sorry, St Clair Bayfield) really did love his wife. Which is all we can really ask for isn’t it? To love and to be loved.

I went to the screening by my myself owing to the fact a train strike was in full swing, but I left with that warm fuzzy feeling you get after a good night out.

My verdict: 5/5 – the film comes out on May 6 and I really recommend seeing it!

I was given tickets to the screening of Florence Foster Jenkins by Mumsnet free of charge for the purpose of review. As always all opinions are my own and based on my own honest experience. You can find out what other Mumsnetters thought here.