How NOT to get a baby to sleep alone

It occurred to me, as I lay on the floor of Little B’s bedroom at 5 o’clock in the morning and held his hand through the rungs of the cot, that I’ve become something of a baby sleep expert.

In how not to get a baby to sleep alone. 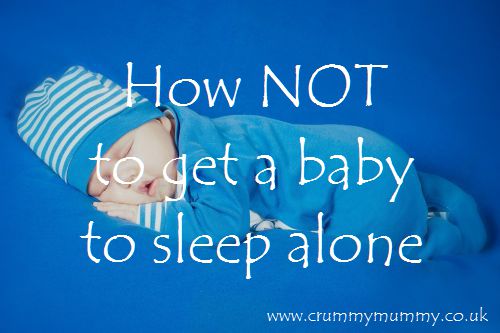 After more than two years of broken nights and co-sleeping (I thought we’d nipped it in the bud but we hadn’t) and with time running out to get Little B out of our bed and into his own before the new baby arrives, we started the new year determined to crack it once and for all.

In a nutshell, this involved Misery Guts taking over bedtime and controlled crying (for Little B, not us. Although to be honest I felt like crying too). It lasted one night and was horrendous.

To cut a long story short Little B cried non-stop for two and half hours before eventually falling asleep with exhaustion, woke several times during the night after which he again cried himself to sleep and had a hoarse voice for a full two days afterwards owing to all the crying.

I felt terrible – off the scale mum guilt – and there was no way we, nevermind him, could go through another night of that. Controlled crying is definitely not for us.

How NOT to get a baby to sleep alone

1. Don’t play Rocket Boy when Daddy comes home from work half an hour before bedtime. (Rocket Boy, in case you were wondering, involves lying on your back on the bed and lifting said boy into the air with your feet). Winding them up instead of winding them down is a bad idea.

2. Don’t play ‘last one into the bathroom is a rotten egg’ when it’s time to brush their teeth either. For the same reason as above.

3. Don’t let Dipsy, La La, Po, Tinky Winky, another Po and the entire cast of CBeebies into their cot. There’s just too much distraction, and more for them to throw at you when they realise you’re actually planning to leave them there. Alone.

4. Don’t let them sleep in your bed, no matter how cute they look. After Little B outgrew his bedside crib, and because I was still breastfeeding, I let him sleep in our bed because it was easier than getting up and down like a yo-yo for night feeds. But what was easier in the short-term most definitely made things harder in the long-term, because he got used to sleeping in our bed with us instead of in his own in his cot.

5. If they settle in their cot but then wake, don’t take them back to your bed even though it seems easier. It’s not, for the same reason as above.

So if controlled crying isn’t the answer, what is? After the night from hell I did what anyone would do and scoured the internet for advice, then came up with a plan that went something like this:

1. Avoid the cry-it-out technique. They’ll fall asleep from exhaustion, not because they’re learning a new routine.

2. Make sure they’re tired at bedtime = lots of activity during the day.

3. Don’t over-stimulate them. So no Rocket Boy or rotten egg games before bed.

4. Quieten things down in the run up to bedtime. So no TV, apps, screens or anything electronic.

5. Stick to the same routine before bedtime every night, and the simpler the better. For us it’s bath, book and bed.

6. Stay within their sight when you’re implementing the new routine. This was absolutely key for us, and is why I think the new routine is working (so far). Stay in their room after you’ve put them in their cot, explain that it’s bedtime and you’re there to keep them company and after they’ve settled down tell them you’ll come back in 10 minutes. Do this every night, and the idea is they’ll take less time to fall asleep.

7. Stay calm (you, not them. Which is easier said than done for Misery Guts). Don’t get cross or raise your voice, just be firm and consistent.

Of course he woke up several times during the night and had to be resettled, but he stayed in his cot all night which was the main thing.

Then, on the third day, this happened.

At 2 years, 2 months and 10 days old Little B slept through the night in his own cot for the first time ever last night. I can’t tell you what a relief it is – we finally seem to be getting somewhere. Just had to share. #baby #sleep #kids #mums #dads #parenting #motherhood #mumproblems #our_everyday_moments #documentyourdays

A photo posted by Natalie Brown (@confessionsofacrummymummy) on Jan 9, 2017 at 2:04am PST

That’s right, for the first time in his whole entire life he slept in his cot, on his own, all night without waking up once.

Of course I was awake every couple of hours, wondering why he wasn’t waking up and if he was still actually breathing.

And of course it hasn’t happened since, but that’s not the point. The point is we know it’s possible.

We’re now on day six and although Little B still wakes up a few times a night, putting him down to sleep in the first place takes as little as 10 minutes, compared to the hour or so it took previously, and he hasn’t slept in our bed once.

So I think we might be finally cracking it.

There is one small detail I’ve failed to impart though: because we live in two-bedroom flat BB is currently sleeping on a mattress on the floor of our bedroom while we settle Little B into his new routine. So I do hope we haven’t swapped one problem for another.

Do you have any top tips for getting a baby to sleep alone? Or have you had a nightmare of it too?