My TV debut: should parents decide when their children start school? 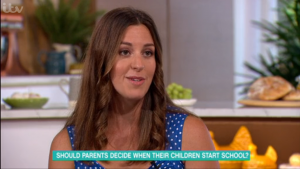 Social media followers will know I have made my TV debut: I appeared on ITV’s This Morning talking about summer babies and whether they should start school at four or five.

It’s been a whirlwind day which started with being sat in hair and make-up next to Sir Terry Wogan (breastfeeding Little B without a muzzy because I’d left it in the green room = full boob on show) and ended with being the most glam I’ll probably EVER be on the school run owing to said hair and make-up.

But more on all that on Monday when I’ll fill you in on all the details (Rylan’s teeth really ARE that white). In the meantime I’ll leave you with the clip itself, which you can watch here

Have a great weekend everyone!