‘Mummy I think I just ate my tooth’

There’s been a milestone moment in our house this week: BB lost her first tooth.

When I say lost, I mean she actually lost it. We don’t know where it is. 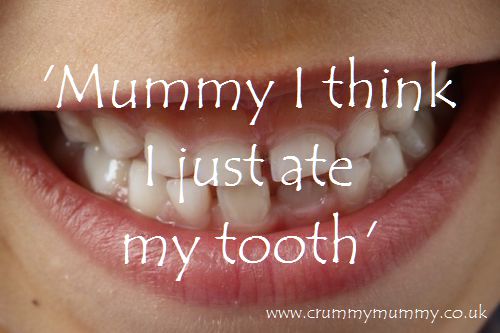 ‘Mummy I think I just ate my tooth’

We’ve looked everywhere for it:

And we’ve scoured the carpets, where I found a surprising amount of stray cat litter granules and pieces of popcorn from Saturday’s treat night, both of which bear a striking and unfortunate resemblance to said tooth.

But there’s no trace of it, which leaves only one explanation: she ate it.

So there was no tooth to tuck inside the satchel of the hand-stitched felt tooth fairy she was given as a baby to leave under her pillow, and there’ll be no storing it in the ‘my first tooth’ tin Granny and Grandpa gave her for her fifth birthday either.

Instead she wrote a note to the tooth fairy explaining what had happened and we left it in a cup beside her bed (not sure where the cup idea came from – I blame Topsy & Tim as they’ve usually got something to do with her funny ideas).

A photo posted by Natalie Brown (@confessionsofacrummymummy) on Nov 24, 2016 at 8:10am PST

To be honest it’s probably just as well it’s disappeared without a trace. I find the whole teeth-falling-out-thing a bit grim, and I was hoping it would happen at school so I wouldn’t have to deal with it.

And there’ll be more where that came from anyway. My mum kept all of ours in a handbag in her wardrobe. They’re probably still there. Yuck.

Have you had to deal with teeth falling out yet? What did you do with them afterwards? And do you know anyone who’s swallowed theirs?