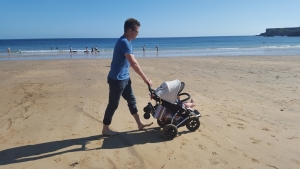 Who’d have thought a pushchair could make you look more attractive? Earlier this year I was sent a Mountain Buggy Swift to review and I do think Misery Guts looks good pushing it, in a way that he just wouldn’t if he were pushing, for example, a Stokke (if you don’t know what that is google it).

Here he is on the beach in Pembrokeshire with jeans rolled up and the sun on his back: there’s definitely something Levi-ad ish about it. Or perhaps it’s just me. Or the fact that I’m in love with this pushchair.

It’s the first buggy I’ve ever come across that you can actually steer properly with just one hand. That was the first thing I noticed after assembling it and I hadn’t even taken it out of the front door.

It comes folded and boxed with picture instructions and literally ‘pops’ up in a matter of minutes. It took me under 10 minutes to fully assemble, even with the ‘help’ of BB and Little B, and the wheels, bumper bar and sun canopy just click on. 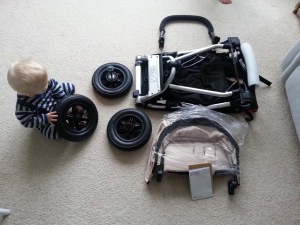 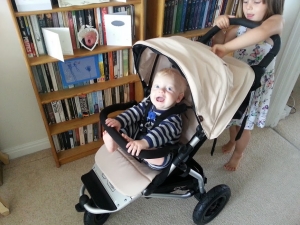 It’s supposed to have a ‘one hand fold’ and while it is easy to fold down I haven’t actually managed it one handed yet. The lock is on the handle bar which is a bonus if you have a buggy board, as they often mean you can’t reach a wheel brake.

I love the harness – instead of having to fiddle around matching up two or more buckles at the same time in order to secure the straps there’s a four-point harness which you click in one at a time – such a simple feature but one which makes life so much easier, especially if you have a squirmer like me.

The storm cover is also great – it covers the front, sides and back of the buggy generously (even your shopping) and has a zip up section at the front so if it’s only drizzling or you’re using the cover as a windbreak rather than for rain you can roll a section at the front up like a little window.

I have just two criticisms with the Swift: the storm cover has a tiny toggle in which to secure it to the frame at the bottom making it really fiddly (I’m tempted to cut it off and sew a bigger one on myself) and Little B, who loves to kick his legs, can kick the bumper bar off. This is so annoying that I’ve taken it off completely and don’t use it.

All in all I love this pushchair – it’s so lightweight and easy to steer that I can hold BB’s hand or pull her along on her scooter while also pushing the buggy – something I haven’t been able to do with any of the other pushchairs we’ve had (and we’ve tried a lot!)

My verdict: At £349.99 I think this is a brilliant all-rounder which will last from birth to toddlerhood and is really good value for money compared to other buggies on the market. 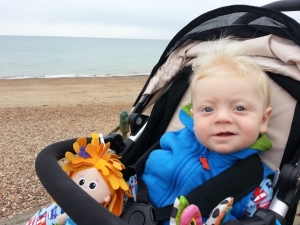 I was asked to review the Swift by Made For Mums – you can read my review in full here.