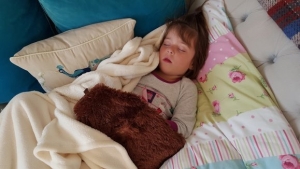 BB’s got pneumonia. It all started innocently enough – she began complaining of a tummy ache and seemed a bit hot – but it quickly escalated into a hacking cough and soaring temperature leaving her unable to do anything but lie on the sofa.

At our second trip to the doctor we were sent straight to A&E where they diagnosed the problem and I have to say I was shocked at the verdict – I hadn’t realised it was so serious. There was a lot of umming and ahhing about whether to keep her in but luckily they let us take her home with antibiotics, which I’m certain is the best place to be.

The doctor found ketones in her wee and my blood ran cold – ketones are produced when the body burns fat for fuel and can be present if you don’t have enough insulin to help your body use sugar for energy. Misery Guts is Type 1 diabetic – meaning his body doesn’t produce insulin – so we’ve always been on the lookout for tell-tale signs in the children in case they develop it too.

But thankfully the reason ketones were present was because she’d barely eaten anything for days, so her body had gone into ketosis, not because she’s diabetic. Phew.

Although she’s been refusing food she has been repeatedly asking for milk, which is handy because this week I’ve been sent vouchers by Cravendale to try out theirs (I’ve never bought branded milk before – I always thought milk was milk but BB immediately told me this was ‘tasty’ milk and it turns out there is a difference: it’s filtered to make it taste fresher).

She’s been going through pints of the stuff and it’s funny because even though she’s not eating you don’t tend to worry so much if they’re drinking plenty of milk. She’s been lying on the sofa with a permanent milk moustache.

Eventually, as I was despairing of how I could possibly get her to eat something solid, a small voice piped up from the sofa saying that she might quite like a doughnut. I don’t usually buy them but was down to the supermarket like a shot buying not one but a box of four, just to be on the safe side.

Then, for the first time in days, BB said she might quite like to get dressed and sit at the table to have milk and doughnuts.

She might still be coughing, wheezing and having trouble breathing, but I think everything is going to be ok. It turns out milk and doughnuts are the BEST home remedy for kids – or my kid anyway. 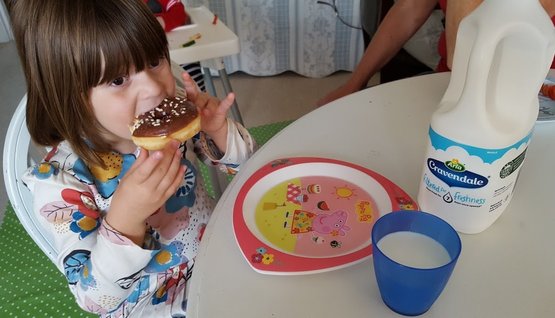 This post is an entry for BritMums #MilkDrinkersMilk linky challenge, sponsored by Cravendale.