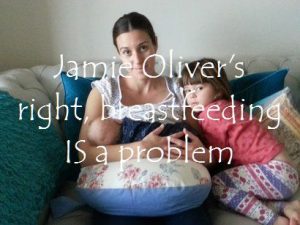 ‘Leave my tits alone’ and ‘stop mansplaining’: those are some of criticisms levelled at Jamie Oliver after he said something needs to be done about the fact that less than 1% of babies in the UK are breastfed until their first birthday.

Of course the knee-jerk reaction has been that he’s directly lambasting new mums and suggesting they can’t be bothered to whip out a boob instead of mixing up some formula. Which actually isn’t what he said at all.

I think Jamie Oliver’s right, breastfeeding IS a problem if less than 1% of babies in the UK are breastfed until they’re one, and I don’t think you have to look very far to see what the problem is either.

It’s not because mums aren’t breastfeeding – for whatever reason – it’s because many women have already returned to work by the time their baby is one. I can categorically say that if I didn’t work from home there is absolutely no way I would have been able to exclusively breastfeed both of mine for 12 months.

The reality is that for many mums who return to work breastfeeding means sitting on closed toilet seats to pump milk (you know you’re perfectly welcome to use the conference room on the top floor, but you don’t want to make a fuss), conscious while you’re expressing that your colleagues are all working hard and this is your third ‘break’ of the day.

The anxiety of this knowledge (you’re sure everyone’s thinking it, even though they haven’t said anything) means your milk isn’t coming in as quickly as it might have done if you were a bit more relaxed, and you’re ‘break’ is therefore longer than it might have been.

When you finally make it back to the office to put your milk in the fridge alongside forgotten ham salads and half-empty jars with contents of questionable age, you spend the afternoon hoping nobody accidentally takes it out and leaves it on the side, rendering all your efforts useless.

Then if you’re really unlucky, because you missed a pumping session on Wednesday lunchtime owing a really important meeting, you’ll wake up on Saturday morning with a thumping headache and fever – the first tell-tale signs of a dose of mastitis all because you didn’t empty your boobs properly.

I’ve been there, done it and got the t-shirt when I’ve worked in-house for clients and publications. It’s the reason why I’m not currently working in-house for anyone, and won’t until I’ve stopped breastfeeding Little B.

Until something is done to change issues like these which are currently facing working mums who’d like to breastfeed then that 1% statistic isn’t going to change.

So if Jamie Oliver, who has successfully revolutionised school meals and campaigned for a sugar tax, wants to stand on his soap box and shine a light on it, I don’t think that’s such a bad idea.

If you like what you read here I’d LOVE it if you’d consider nominating me in this year’s MAD Blog Awards. I’m going for Best Writer, Best Pre-school Blog or (dare I say it) even Blog of the Year – all you have to do is click on the badge below and enter http://www.crummymummy.co.uk into the relevant box. Thank you SO SO much! x