I’ve been expecting you 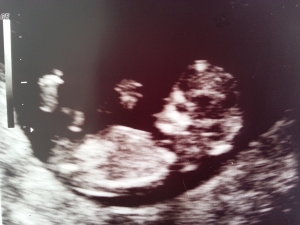 I’m not sure what I’m more pleased about: the fact it appears BB is going to have a brother or sister in the autumn, or the fact I’ve managed to get a Robbie Williams album title in the heading of this post (the former, obviously).

Yep – it’s officially official: all being well three will become four in late October or early November (my money’s on November) and a whole new chapter of Confessions of a Crummy Mummy will be born.

I have no doubt, at times, this will result in me becoming even crummier – like using the hoover nozzle to clean out the bottom of the fridge (I call it multi-tasking) or making one batch of beef and tomato sauce and passing it off as numerous different meals (Bolognese, cottage pie, meat loaf) for days, if not weeks, afterwards.

In the meantime, I better put my thinking cap on and decide what baby number two will be known as online.

BB is currently telling anyone who’ll listen that there’s a burger in Mummy’s tummy because she thinks it’s funny. I’ve had some odd looks from strangers because at this stage of pregnancy I do indeed look like I’ve eaten one too many burgers. Surely I can come up with a better name than that…

🖤 Why I don't wear black 🖤 After buying a ne