They say if you can’t beat them, join them.

After watching from the side lines as Misery Guts competes in running event after running event I’ve decided to enter my very first organised run. 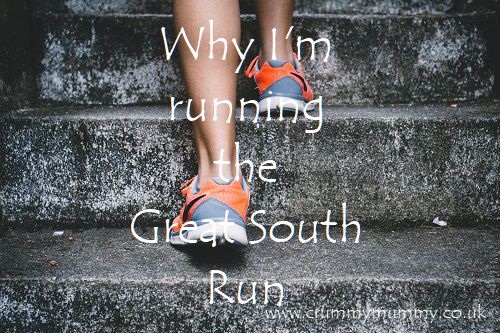 In two weeks’ time I’ll be taking part in the Great South Run, a 10 mile race around Portsmouth to raise money for charity.

If you’re a regular follower of the blog you’ll know I love running and have been running for years. I’ve carried on running into the third trimester of all three of my pregnancies and run twice a week, first thing in the morning when the kids are still sleeping so I can squeeze it in.

But I’ve never run 10 miles all in one go before, and taking part in an organised event is very different from pootling along at my own pace at home. So why now?

If you’re a regular follower of the blog you’ll also know that the reason why Misery Guts takes part in so many running events is because he’s training to run the Marathon Des Sables, a 150 mile marathon across the Sahara Desert in April 2019.

He’s doing it because he’s type 1 diabetic and wants to prove to himself he can despite having a chronic disease, and to raise money for research into type 1 diabetes which could eventually lead to a cure.

The truth is the fact Misery Guts is type 1 diabetic affects every single member of our family, as it does every family with a member with diabetes. And the sooner a cure is found the better, which is why I, too, am running for diabetes.

I’m also taking part because the event is sponsored by Simplyhealth, who we’ve been working with to help bang the drum about their #MyEveryStep campaign, which is all about the little steps we can take to lead healthier lives. And it would be a bit hypocritical of me to tell you all about it without actually doing anything myself.

So which charities am I running for?

I’m running the Great South Run for Misery Guts’s three chosen diabetes charities: JDRF, which funds research into finding a cure for type 1 diabetes, T1International, which saves the lives of type 1 diabetics living in parts of the world with no access to insulin, and Diabetes UK, which provides vital support so people don’t have to face diabetes alone.

I haven’t set up my own Just Giving Page because I want to help Misery Guts reach his target of raising a combined total of £3,000 for the charities. So, if you can spare £1 or £2 or even 50p for one or all three of the charities (when you donate through Just Giving the money goes directly to the charities), I promise to run 10 miles in return.

Obviously running 10 miles around Portsmouth isn’t a patch on the 150 miles Misery Guts will be running across the Sahara Desert next year, but it’s a big step for me. And every little helps. So if you’d like to support me and help change the lives of type 1 diabetics and their families by making a little donation you can do so here!

Have you taken part in the Great South Run before? Do you know someone who has? Any tips and advice gratefully received!

The Great South Run takes place on Sunday October 21st, 2018 and there’s still time to enter – to find out more click here. Although we are working with Simplyhealth to help promote their #MyEveryStep campaign I have not been paid for this post – I simply want to tell you about it to help raise as much money as possible.