What you want to happen and what you don’t. That’s the point of a birth plan, the one single page in your otherwise extensive maternity notes in which you’re supposed to convey your hopes and fears for labour and birth to a midwife you’ve probably never met before.

Which is just one of the reasons, third time around, I’m not writing one. 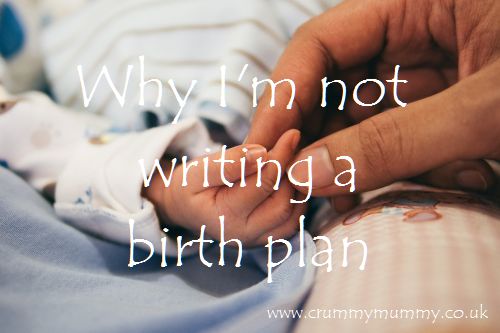 When I had BB I quite literally laboured over the birth plan (apparently some hospitals are calling them birth ‘road maps’ now, the theory being that if it doesn’t quite go to plan you can take an alternative route and still get back on track. I’d love to know how long it took them and how much it cost them to come up with that one).

I thought about BB’s birth plan long and hard – I filled in every section, making use of every spare inch of space, and even added asterisks in the margins in a bid to express my hopes for the ‘perfect’ water birth I’d pictured in my head.

Which all went out of the window when she was two weeks late and I was induced on the 15th day.

The total opposite of everything I’d hoped for happened – we’re talking strapped to a bed and monitored up complete with epidural, catheter and goodness knows how many other mysterious tubes – so when I had Little B three years later I didn’t bother writing one at all.

I left the page completely blank for fear that writing one thing would mean the total opposite would happen again. And it was just as well because everything happened so quickly my notes were on another floor in triage when I was actually ready to have him, leaving the midwife to record the time of birth on kitchen roll, so filling it in would have been a complete waste of time anyway.

This is the birth plan (sorry, road map) in my current maternity notes as it stands right now. 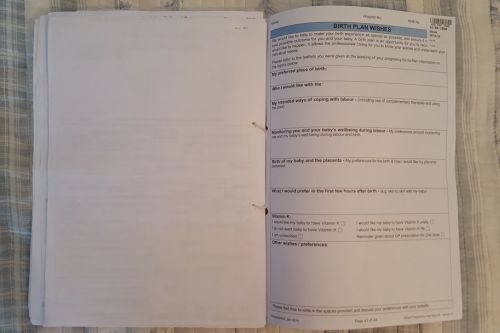 I’m tempted to leave the page totally blank again so as not to tempt fate, but I do really want a water birth and I’d like to get in the water as soon as possible, so I probably ought to make this known.

Did you write a birth plan and did it go according to plan? Or didn’t you bother?