It’s the starring role in the school nativity play, the one all the girls – and apparently a lot of their parents – want, but only the select few ever get to play.

I’m talking about Mary, mother of Jesus and husband of Joseph and arguably one of the most important parts in the history of school plays. The part BB managed to bag in her school nativity this year. 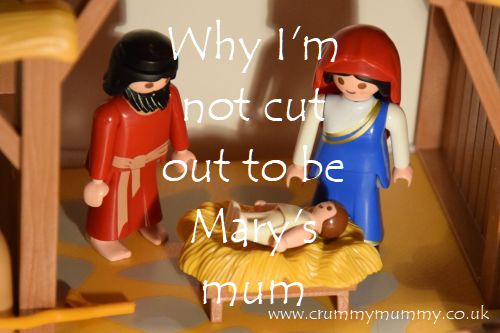 Apparently ‘Why-Isn’t-My-Child-Mary-Syndrome’ is an actual thing over on Mumsnet (I should add it to my post on 10 types of school play parent), and according to a piece Mumsnet’s founder Justine Roberts wrote in The Telegraph I should ‘be prepared for possible comeback from parents who have lost the nativity play plot’.

She recounts the story of a Mary’s mum who was confronted by a mum whose daughter usually got the part in the playground who said to her: ‘I don’t understand why your daughter has got the part. There isn’t anything special about her.’ Yikes. What happened to Christmas being the season of goodwill? Is this what I’ve got to come?

The first I knew about BB landing the role of Mary was when one of her friends came bounding up to me in the playground at pick-up telling me BB had some ‘big news’, closely followed by BB herself declaring triumphantly to anyone who’d listen that she was going to be Mary.

I thought, to avoid argument, rivalry and disappointment, that the role of Mary went to the year two girl whose birthday falls first in the school year, but apparently not.

Unbeknown to me there had been auditions for the role of Mary and it was BB who emerged victorious.

I was surprised but I can’t pretend I’m not proud. As a non-Mary I’d have loved to have landed the part of Mary in my school nativity plays, but was usually cast as an angel and in one case an alien (don’t ask).

And BB’s gone and done it, all by herself.

The thing is, as a non-Mary, I’m worried about what it all means. Because there is a difference between Marys and non-Marys, isn’t there? There certainly was when I was at school.

Experts reckon giving a child the role of Mary (or Joseph) puts the idea in their head they’ve got a ‘special role’ in the world, while for the rest of us being overlooked in the school play can affect people for the rest of their life.

Indeed the Daily Mail once ran a feature entitled ‘How to decode your child’s nativity role’ in which Mary is listed as being ‘the teacher’s pet, the class’s prettiest, most pleasant girl’ and Joseph is a role boys ‘dine out on well into their teens’. This is serious stuff people.

And the truth is I just don’t think I’m cut out for the responsibility of being Mary’s mum.

I’m also slightly worried about it on two counts: the first being that last year she projectile vomited over the donkey, and the second being that I’ve caught her ‘breastfeeding’ her doll in preparation for the role. I know teachers are getting increasingly inventive with the Christmas story (ours had a wild west theme last year – I’m still not entirely sure why) but I’m pretty sure breastfeeding Jesus doesn’t come into it.

I’m also pretty sure last year’s projectile vomiting was brought on by nerves, and all she had to do was sing at the school fayre. Projecting your voice in an audition in front of your classmates is one thing, but doing it on stage in front of the entire school and their expectant parents, some of whom may be experiencing ‘Why-Isn’t-My-Child-Mary-Syndrome’, is quite another. What happens if she gets stage fright?

There are all sorts of horror stories floating around, including a tale on Mumsnet (I know, I know, I should probably stop googling) about a boy who ‘for comfort, unzipped his flies, got his willy out and clutched it for the whole performance’. The poor little sausage. (The boy I mean).

But perhaps I’m overthinking it. BB is only six, after all. How important can it all really be?

On the upside, Mary is good news on the costume front – a blue dress and a veil has got to be better than bending wire to make halos and fashioning headdresses out of tea towels and all that malarkey.

Are you mum (or dad) to a Mary or Joseph this year? Were you a Mary or non-Mary like me when you were at school? And have you encountered ‘Why-Isn’t-My-Child-Mary-Syndrome’ before? I’d love to hear your experiences!