‘I still don’t love my daughter’

Those are the incredibly brave words of Katie Pike, a 29-year-old mum-of-one on the reality of post natal depression (PND).

With the exception of my pregnancy after multiple miscarriage story I don’t often touch on really serious subjects on the blog because I prefer to entertain and try and put a light-hearted spin on the unpalatable sides of parenting. 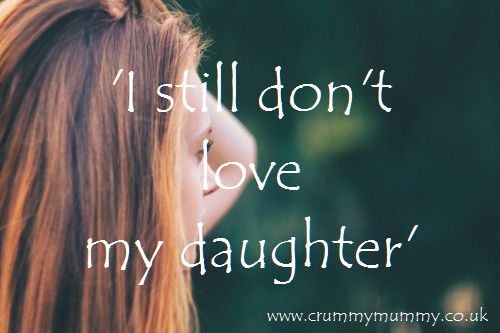 But when Katie, a marketing consultant from Northamptonshire, got in touch to see if I’d be willing to share her story on being dealt what she refers to as ‘the dark hand’ of post natal depression, I couldn’t not.

Katie doesn’t blog herself (although I think she should – what you’re about to read is powerful stuff) and doesn’t have a business or website to plug, she just wants to share her story to help anyone else who finds themself in the same boat.

‘I still don’t love my daughter’

“My daughter has just turned two-years-old. She walks, talks and makes me laugh, a lot. But I still don’t love her. I’m not ashamed to say that, now.

I was 26 and recently married when I got pregnant and I LOVED it. My pregnancy couldn’t have gone better, and my daughter was born fit and healthy. But life as a new mum was hideous.

After a few weeks I started to struggle. I’d been having flashbacks from the birth and issues with recovery down below, and as the weeks went on I became very disconnected and lost interest. It was put down to baby blues and I was told it would pass.

The longer it went on, the more isolated I felt. It was all about the baby and everyone just looked straight through me, so I bottled up how I was really feeling and hoped it would go away.

Days, weeks, months went on and I kept pretending everything was ok. I avoided questions I didn’t want to answer through fear of being marched down to social services.

“Aren’t they just gorgeous at this age…” No, she’s ugly, I hate looking at her and I wish she’d never come into my life.

“It’s exhausting but that love for them just keeps us going doesn’t it…” I don’t love her. I feel like she’s an imposter and my real baby was taken from me at birth.

I felt like I was living a double life – my fake public one where motherhood was just perfect, and the real one that was suffocating me. After six months of thinking I was keeping it together, I started to unravel. I became confused and couldn’t tell what was real anymore, but I didn’t tell anyone.

One morning, I googled ‘when did you fall in love with your baby?’ It was in the hope that someone, somewhere, like me couldn’t look their baby in the eye. I was faced with dozens of forum discussions and they all pointed to post natal depression.

It took me two more months to admit it to myself. I had got to such an extreme point of denial that I was actually giving advice to new mum friends about going to the GP if baby blues didn’t lift. I seemed to be getting the words out to others that I desperately wanted someone to say to me.

Reality started blurring with obsessive thoughts. Dark thoughts that even now I find hard to put into words. When nobody was around I would smack my head over and over in an attempt to get rid of them, but they’d come back darker and more frightening each time. I knew something was seriously wrong but I was on self-destruct mode.

One day in particular I’d convinced myself that my husband was having an affair. I was driving home and getting worked up that I was a failure when I had the most overwhelming urge to put my foot down on the accelerator and drive into the back of a lorry. I had the baby in the car. Thankfully something, whatever it was, kicked in and stopped me.

Enough was enough. I had spiraled out of control and it was terrifying. I didn’t recognise myself and I was being totally irrational, unpredictable and a danger to the baby and myself. Shit had got real and I needed to face up to it and get help.

That evening I made the best decision of my life. The first words were the hardest to get out, but before I knew it the floodgates opened and I’d told my husband everything. He didn’t say a word until I had finished, and then he held me. Neither of us said PND during that very long and emotional discussion, but we both knew it. From that moment, everything was only half as awful as it had been.

Over to the professionals

I went to the GP and she confirmed it was PND. I was really ill. The cruelty of this illness and the stigma around it had silenced me, consumed me, and robbed our baby of having a mother for the first eight months of her life. I was prescribed antidepressants and fast-tracked for therapy. I went from feeling invisible to being everyone’s priority and we all had one goal – to get me better so I could finally learn to love my child.

Fortunately I found the strength to ask for help but it was torture getting to that point.

I have now been discharged from treatment but it will always be there under the surface. The difference is now I know it can’t beat me, because when my beautiful daughter, Evelyn, now looks at me with her cheeky grin, my heart is finally starting to ache with affection and almost love, not pain because I can’t.

This time last year I was thinking of ways to give her away and kill myself. Today, I woke up and danced to ‘Shake Senora’ on the radio, I wrote an article, and later I’ll be ‘Mumma’ and read ‘Mr. Magnolia’ again and again. And it will be real.

We’re all in this together

If you suspect that a new mum is struggling with more than baby blues, ask them. PND is not dirty. If that means a few minutes of awkward silence as she finds the words, that’s nothing compared to the months of silence she could have struggled through like I did.

And if you’re that new mum, dig deep and find the strength to tell someone. It’s not your fault you’re ill, but you and only you are in control of what happens next.

I have discovered that motherhood is not easy, for anyone. What one mum may breeze through, another may literally be having the worst time of her life with. For me, I was dealt the dark hand of PND.”

I think you’ll agree Katie’s story is a powerful one and I’m so grateful she found the strength to speak out – I have no doubt her words will help to others.

For more information and support on post natal depression here are some useful links:

Do you have experience of PND? Did Katie’s story touch you as much as it did me?