Would you go on holiday without your kids?

That’s the question I asked when Misery Guts and I prepared to leave our older two for six days and nights and fly 1,000 miles across Europe to a wedding. And it produced quite a response. 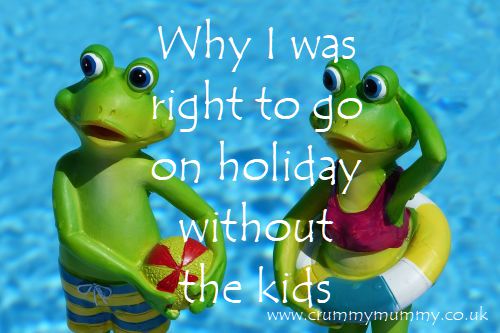 There were the ‘hell yeses’ and the ‘absolutely nots’, and while it took a lot for me to leave them and I can’t tell you how many bouts of mum guilt I had while we were there, a bit like why I was right not to write a birth plan I do think we were right to go on holiday without the kids.

1. We got to see a part of the world we just wouldn’t with kids. Let’s face it, some types of holiday just aren’t child-friendly. We spent a day in Rome where we clocked up almost 20,000 steps exploring the city and viewing ancient monuments. Had the kids been with us they’d never have walked that far, they’d have moaned about queuing to get into attractions and we’d have had to have had eyes in the back of our head every single second. Which isn’t fun for anyone.

3. We all had time to miss each other. And missing people gives you time to think about them, and thinking about them makes you appreciate them more. I didn’t miss almost-three-year-old nappies though.

4. We came back better parents. Because we had a change of scene, a chance to relax and unwind, I came back a better mum with recharged batteries and lots of patience instead of running on empty with a dangerously short fuse, which is the usual state of play.

5. They got a chance to bond with their grandparents. My mum and dad looked after them for the majority of the trip and because they live too far away they don’t usually get to play a part in their everyday, day-to-day lives. This gave them all a chance to spend time together in a way they just wouldn’t normally.

Of course we missed them like hell and I wouldn’t go out of my way to book a holiday without the kids in the future, but if circumstances such as an invitation to a wedding to which kids weren’t invited arose again I think there are benefits to be had all round.

What do you think? Do you think I was right to go on holiday without the kids? What would you have done in my shoes? I’d love to hear your thoughts!