People often say to me they don’t know how I do it.

The truth is I don’t know how I do it either. 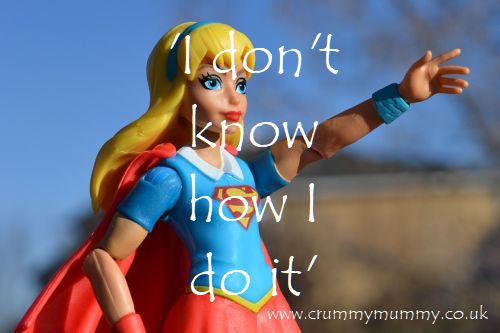 This was driven home to me when we left BB and Little B with my mum and dad for a few days of our two week half term so we didn’t have to arrange extra childcare.

We kicked off the working week with just Littlest B to look after and oh my goodness it was so easy!

People often assume that as a stay-and-work-at-home mum I don’t work full time hours, but in fact I work more hours now than I did as a news editor before I became a mum.

I edit a magazine, which involves commissioning, editing and proofing copy, liaising with brands and managing a small team of writers, I write freelance features for national magazines and newspapers and I run the blog, which is now a business in its own right.

I also bear the brunt of our childcare during the week owing to the fact Misery Guts goes out to work and I don’t.

I type one-handed while breastfeeding with the other, my back stinging in protest. I get the highchair out and feed Littlest B while sandwiching my phone between my ear and my shoulder, hoping the person on the other end can’t tell I’m trying to coax food I didn’t have the time to make into a baby’s mouth at the same time.

I collect Little B from nursery, then BB from school, and we all return home where I carry on with the working day with all three of them to entertain at the same time.

I change two sets of nappies, break off to load and unload the washing machine, pump breastmilk for the precious day and a half my mother-in-law helps out, make the tea, serve the tea and referee the most ridiculous arguments you’ve ever heard.

I also try and go running and swimming a few times a week. I get up and go when everyone’s still asleep because it’s the only opportunity there is, and if I didn’t I’d go mad. It’s the only time I’m really, truly on my own.

It’s true that I’ve been there to feed all my babies myself, wipe their tears and see all their ‘firsts’, but if you’re expecting me to say I wouldn’t have it any other way you’re wrong. I’d have it just a teeny, tiny bit easier.

There’s no 9 to 5 – there’s the minute I wake up until the minute I go to sleep. Oh, and did I mention I haven’t slept through the night since the arrival of baby number three?

But you carry on, because you have to. I’m not writing this post for sympathy – I do have to work but we didn’t have to have three children and I don’t have to get up while everyone is sleeping to go running – and I’m not saying I have it harder than anyone else, either – we’re all superheroes in our own right.

I’m writing this because I think stay-and-work-at-home parents especially rock. And not having the older two at home for a few days has highlighted that.

When BB was Littlest B’s age I thought life was hard – yet I was still on maternity leave and I only had one baby to look after. But the thing is it was hard, at the time.

This week though, for a few days anyway, it’s been a bit easier.

And the silence has been deafening.