How do you tell a child about death? 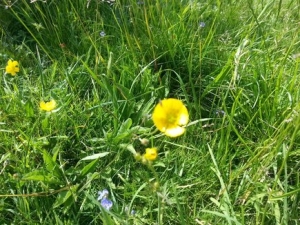 After exchanging looks with Misery Guts I explained that that was the cemetery where people are buried after they die, and the gravestones are stones to mark where the person is so their family knows. She thought about it for a minute and asked me what the people are doing there, so I said they’re not doing anything because they’re dead, which means they’re not really here anymore.

Then a few days later we were walking home from school and BB asked me what was under the pavement. I said soil, just like on our allotment, and pipes to our houses. She then asked me what people do there and I realised she was referring to the cemetery.

I told her that when they die some people are buried under the ground. ‘But don’t they want to be at home with their children?’ she asked (it hasn’t occurred to her this is something that happens to children too). I told her I expected they did, but when you die it means your heart has stopped beating. She then felt her heart and told me hers was beating, and told me mine was, but then, giggling, that Little B’s wasn’t (I won’t read too much into that).

I was just gearing myself up for the next bit when we arrived home and she bounded up the front steps and was on to the next thing, declaring it was a good job we were home as it had started raining. She hasn’t mentioned it again.

But I know she will, and I know my explanation has been woefully inadequate so far. The trouble is what do you say? How do you tell a child about death? Apart from one of her great grannies, who died when she was nine months old and too young to remember, she hasn’t been faced with it yet.

I want to protect her from ‘real life’ for a long as possible – right now she has no idea that one day we all won’t be here anymore, or of the ways that not being here anymore might come about.

If I could wrap her in cotton wool I would.