When I say ‘out’ I don’t mean in broad daylight (although I’m in no way judging), I mean after dark in a long coat to get wine (not sure whether that makes it better, or worse). 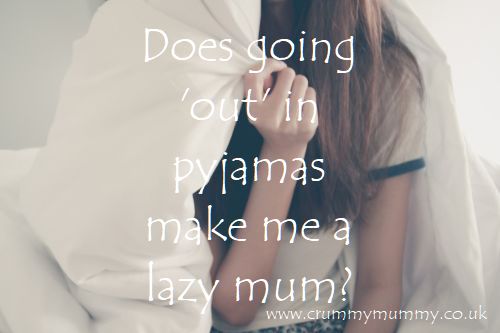 As a stay-and-work-at-home mum with three small children evening wine runs are an essential rather than a luxury, and I’m not afraid to admit to doing it in my jim jams (Cath Kidston by the way, but again, I’m not sure whether that makes it better, or worse). 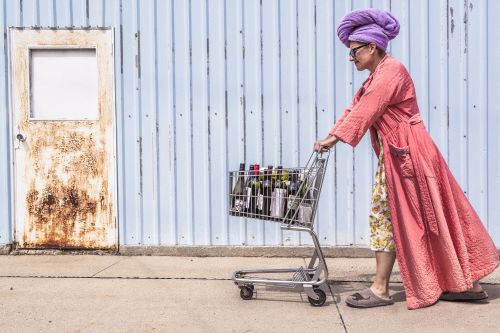 I don’t mean I go to the ‘big’ Tesco in such attire, I mean around the corner to the ‘little’ Co-op.

And there’s the thing: the other day, on one such wine run, I looked down, noted I was wearing pyjama bottoms and thought ‘I can’t go to Sainsbury’s, I’ll have to go to Co-op’.

Which is ludicrous when you think about it. Why should going to Sainsbury’s in pyjamas be any different from going to Co-op in pyjamas?

I’m equally likely to bump into someone I know in both stores – they’re relatively close together servicing exactly the same area of the neighbourhood – yet somewhere in my sleep-deprived mind going to Co-op in pyjamas isn’t as ‘bad’ as going to Sainsbury’s.

Am I alone in thinking this? I asked some fellow mums and dads whether they would ever pop to the shops in their pjs, and if so whether which supermarket you go to makes any difference, and do you know what? Their answers aren’t at all what I expected!

“Whilst I’m all for changing into my pjs at the earliest opportunity, I think going out in them is pure laziness – it takes seconds to throw on some leggings and a top,” says Rachel at Coffee Cake Kids.

“Pyjamas are for in the house only – I only run out to put the bin out in them if I really have to!” says Jen at Just Average Jen. “Who doesn’t have time to pop on some leggings or similar?”

“Nooo. When do you reach that point in life when putting on some trousers and a T-shirt is too much?” says Pete at Household Money Saving. (Now, Pete now!)

“I wouldn’t dream of it now but back in my student days I lived opposite a Sainsbury’s Local. I don’t think the staff recognised me if I went in wearing actual clothes!” says Becky at Mommy And Rory.

“I have done and will do again,” says Kate at The Mum Conundrum. “I have a long coat and boots though, so you only actually see about six inches of pyjama. I’m fairly unrepentant – I constantly look tired and bedraggled anyway, so I’m pretty much beyond caring.”

“I would go to the local shop in my pjs but definitely not the big supermarket – there’s something about driving in my pyjamas that I find a bit odd!” says Bridget at Bridie By The Sea.

“I can see the temptation if it is a corner shop and I’m suitably covered,” says Victoria at The Growing Mum. “I wouldn’t go to much further in case I bumped into someone I recognise and had to stop and chat.”

So what I thought was going to be a post about supermarket snobbery has in fact turned into a post about being a lazy mum.

What do you think? Have you ever ‘popped’ anywhere in your jim jams? Does wearing pyjamas on the wine run make me a lazy mum? I’d love to hear your thoughts!