Getting a GP appointment is a lot like buying concert tickets 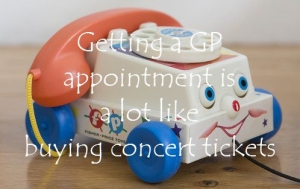 Today I’m coming to you from my bed. I’ve caught Little B’s ‘non-specific’ virus, which ironically turns out to be quite specific.

I woke up one morning this week with an itchy rash all over my body (the type of rash I have only ever experienced once before, when I was four and my dad filled an old lifeboat with sand to turn it into a sandpit. It turns out it was made of fibreglass and it wasn’t long before my brother and I were covered in red scratchy hives. But that’s another story) and 24 hours later I couldn’t move.

All of my joints seized up: my neck, shoulders, wrists, knees – the slightest movement sent shockwaves of pain ricocheting through my body. I have no idea if Little B felt like this when he was ill last week, because he’s too young to be able to say, but it would explain why all he wanted to do was sit still in my lap without moving.

There was nothing for it but to take to bed (annoyingly too poorly to actually be able to enjoy it) and phone the doctor to see what could be done about it. Because it’s a three week wait for a standard doctor’s appointment – by which time I could well be dead – where we live this involves phoning the surgery first thing in the morning for an ‘emergency’ appointment.

It occurred to me, as I pressed redial for the umpteenth time, that getting a GP appointment is a lot like buying concert tickets – something I was an old hand at back in my Take That days. Me and my friends used to employ all sorts of strategies to make sure we got our hands on the golden tickets before they sold out.

Here are the similarities:

1. First, you’ve got to decide on your strategy: are you going to queue up outside, or phone up? Queuing outside means you’ve got one up over the people on the phones, but what happens if you’re still stuck in the queue when the phone lines open? Think carefully.

2. Nifty finger work is required. As soon as you hear the engaged tone it’s time to hang up and redial. If you’re determined to get an appointment for that day, expect to do this over and over again until you get through (62 times in this case, pictured).

3. Finally getting connected doesn’t mean you’re home and dry – you could find yourself on hold in a queue until an operator becomes available.

4. You’re unlikely to get the slot you hoped for. Initial disappointment at not getting a 10am appointment (= front row) quickly turns to gratitude that you got a 5.20pm appointment (= stalls with restricted view). At least you’re going – there will be some poor souls who aren’t.

5. After putting the phone down, appointment in the bag, you reflect what you’ll do differently next time to ensure a better slot.

Is getting a doctor’s appointment the same in your neck of the woods?