Flashback Friday: the day we nearly burnt down my mum & dad’s house 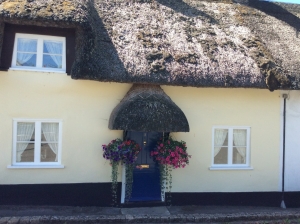 This time two years ago we were preparing for our first foreign family holiday, which called to mind the previous year’s sojourn which included the day we nearly burnt down my mum and dad’s house (pictured). I thought you might enjoy the tale this Flashback Friday, so here’s what I posted on 5 July, 2013:

The chances of burning down a Spanish villa?

BB’s passport has arrived, the suitcases are (almost) packed and we’re off on our first foreign holiday à trois.

Like Mothering Sunday, I think it’s fair to say it can’t be worse than our last holiday – a week at my parents’ cottage in Dorset. Their 17th Century thatched cottage, which we nearly burnt down. I kid you not: a chimney that hadn’t been swept for a while and the wrong kind of wind culminated in a chimney fire the likes of which their village hadn’t seen for a very long time.

Five fire engines – mandatory when dealing with a thatch to ensure there’s enough water on board, apparently – raced to deal with the blazing inferno which was so hot it shone a bright amber and red light in a perfect semi-circle on the living room floor. Plumes of smoke seeped not only from the chimney but the entire thatch, and emitted itself in a perfect line between the seam of our thatch and next door’s.

Misery Guts, BB and I could do nothing but watch helplessly from the pavement as fire fighters clambered all over the roof and pumped water down the chimney as well as up, while a neighbour helpfully pointed out that the water damage would probably be worse than the fire and smoke damage. Others who don’t usually walk their dogs at that time of night promptly decided it was time for walkies, and people spilled out of the pub to watch, pints in hand.

It took about an hour to put the fire out, and luckily for us it was contained to the chimney. It turns out the thatch did exactly what it was supposed to do: let the smoke out wherever possible. So the roof wasn’t on fire after all. And as the fire fighters were pumping the water in, they were also pumping it out. So while I was imagining water cascading down the walls and warping the centuries old beams, the worst damage was from the fire fighter’s muddy boots on the stairs carpet.

I’ve lost count of the number of times I’ve heard my dad jovially tell the tale, but I still can’t laugh about it. I aged about 10 years in one hour, and the thought of what could have happened haunted my dreams for weeks.

So we’re off to a Spanish villa this time, with no wood burning stoves in sight. There’s little chance of burning that down, surely… 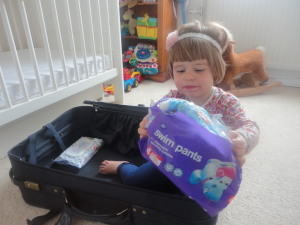