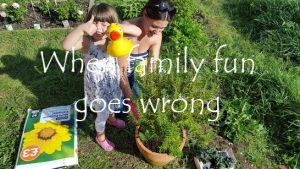 I suppose it was only a matter of time. It’s been a year since we finally got our own allotment and the novelty has worn off already. Just 12 months in to what I hoped would be a family project spanning BB and Little B’s childhoods Misery Guts refers to it as a ‘pain in the ar*e’ and if I so much as suggest we go there at the weekend BB throws a hissy fit and says ‘but it’s ‘BOARRRING!’

Of course it was inevitable the shine would wear off at some point but I didn’t expect it to happen so soon. When we took on the plot I had visions of us kicking our shoes off and picnicking on the grass in summer, pulling our home grown veg from the soil in the autumn and BB and Little B chasing butterflies in the spring. But no-one ever wants to go.

By the end of last year I’d given up battling with BB and Misery Guts each weekend about making time to go and decided to leave it until the new year to decide what to do. What with Misery Guts’s increasingly time consuming marathon training schedule, swimming lessons, birthday parties, family commitments and everything else you have to cram into the weekends we didn’t set foot on the allotment for months, and given that we’d only managed to get half of it under control since inheriting it I thought the best thing to do would be to give it up and let someone else have a go.

But then Christmas happened, when I had time to reflect on BB starting school and Little B starting nursery, leaving me working solely from home. What I didn’t appreciate was what being at home all the time is actually like, and how much I need a change of scene by the weekend.

An allotment is the perfect bolt-hole: away from the TV and computers and phones, away from the house and washing and jobs, and out in the fresh air. So I decided if they don’t want to go to the allotment I’ll go by myself.

Despite how busy we are for the last few weeks I’ve been really assertive and announced that I’ll be going to the allotment for two hours at some point over the weekend, and making sure it actually happens. I’ve planted daffodils and primroses in the rain, I’ve cut back the raspberries and I’ve pulled out the last of the parsnips. 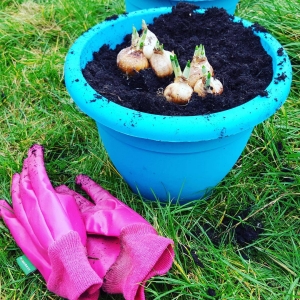 It may not be turning into the family fun I’d hoped for, but actually that’s fine with me. I quite like having a little project of my own to slowly chip away at by myself.