Is there such a thing as the perfect bedtime routine? After trying to establish one with three – very different – babies I’m not so sure.

A little while ago I asked when is the best time to start one – two weeks, two months, two years? – and now I’m (rather proud) to report we’ve established a bedtime routine at six months.

It may have taken three babies and therefore three goes at it, but Littlest B is now six months old and goes to bed at the same time every night without a fuss. And we’ve got our evenings back.

You might be thinking ‘big wow’ (accompanied by a big eye roll!) but with an almost three-year-old who has only very recently admitted defeat and succumbed to a bedtime routine this is momentous stuff.

Here’s what we did.

1. Make sure the same thing happens at the same time every day. For us this is bath, book, bed. One of the reasons I waited until six months to start a bedtime routine is that it wasn’t until we started weaning that we needed to bath Littlest B everyday. So trying to introduce a routine earlier, when the same thing wasn’t happening at the same time everyday, seemed pointless. Now with the bath, book and bed routine she knows what to expect after tea everyday, and that after that we expect her to sleep!

2. Ensure they’re nice and comfy: so that’s clean, dry, winded, not too hot, not too cold and not hungry. Basically, don’t give them anything to cry about! We’re still using our Orla Kiely Gro Company sleeping bag, and I’d recommend it to anyone.

3. Take their mind off the fact they’re going to be left alone. The books might tell you cots are for sleeping and not for playing but all three of ours have had something to play with while going to sleep and it’s worked a treat. Fisher-Price very kindly sent us their new Hippo Projection Soother (£22.99) for Littlest B and she loves it. 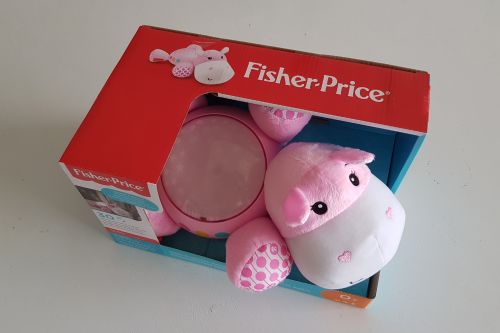 It plays 30 minutes of lullaby music, nature sounds or white noise and it’s got a light-up tummy that projects stars onto the ceiling or side of the cot. You can put it on a chest of drawers or table top but we give ours to Littlest B to play with – it’s got a super soft head and legs and she often falls asleep with it in her arms. 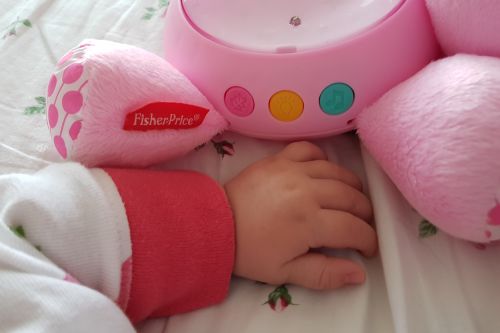 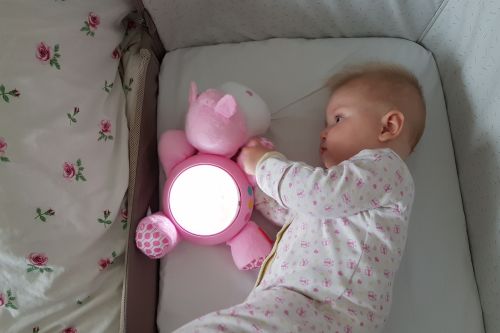 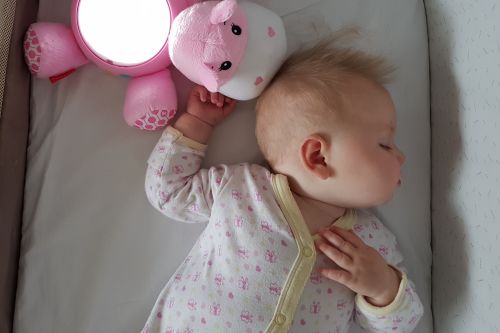 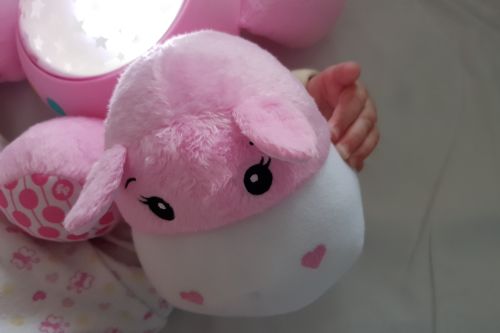 4. Walk away. Leaving your tiny baby alone in a room – especially if it’s upstairs and you’re downstairs – can be nerve wracking stuff. Especially if you haven’t fed them to sleep (you can read why I think there’s absolutely nothing wrong in doing that in a letter to my pregnant friend) and they’re still wide awake. But if you don’t leave them to it you’ll never get anywhere. If you’re really worried invest in a video baby monitor – we use BT’s Lightshow baby monitor – so you can see what’s going on without hovering in the door way.

5. Relax! You can do this! You might take one step forward and two steps back – and sometimes it might seem like three or four – but you’ll get there in the end. Eventually they’ll learn to settle into the new routine.

Have you established a bedtime routine recently? How did it go? What are your top tips?

We were sent the Fisher-Price Hippo Projection Soother free of charge for the purpose of review. As always all opinions are my own and I would never recommend a product I don’t truly believe in.