Just when you’ve settled nicely into a routine, it’s time to change it again and get used to a new one. After six months of exclusive breast feeding it’s time to start weaning Little B, and I’m not sure I’m ready. Mainly due to the constant wiping.

As with BB we’re opting for baby led weaning, which for those of you in dark means Little B is given whole pieces of food or a loaded spoon to feed himself, and is the opposite of parent led weaning, ie me shovelling puree into his mouth on a spoon.

It’s a brilliant way to learn to love good food – instead of everything being pureed into an unrecognisable pulp he is introduced to food in its original, colourful form – broccoli trees to suck, carrot sticks to lick and strips of chicken to chew.

Placing things on his high chair tray and watching him explore the different colours, shapes and textures with his fingers or handing him a loaded spoon is a picture – even if at this stage most of it ends up everywhere but his mouth.

For us baby led weaning also makes perfect sense: as a breast fed baby Little B chooses when – and when not – to feed (there’s no way you can make a breast fed baby drink if he doesn’t want to), and by the time he’s three or four we’d be expecting him to feed himself, so it seems silly to interrupt this process by spoon feeding, which would mean he’d have to learn how to feed himself again afterwards. 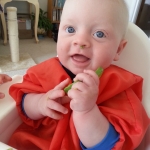 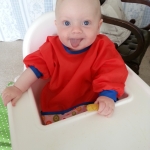 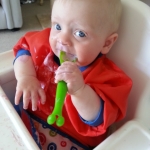 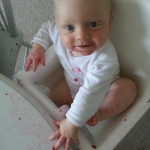 Once again I’m using Gill Rapley and Tracey Murkett’s Baby-led Weaning book as a guide – and I must say things have certainly moved on in the three years since we were weaning BB.

Ella’s Kitchen’s baby food range – which we’ve very kindly been sent to review – now includes finger food designed specifically for baby led weaning including ‘grab me’ melty puffs, ‘pick me’ melty hoops and ‘grip me’ baby biscuits (all pictured), which are just the right size and shape for Little B’s fingers as he’s learning to pick up food on his own.

Everything is 100% organic, and while the melty hoops come in handy, resealable screw cap jars the melty puffs are in bags and great for on the go. I could so have done with this three years ago!

<We’re only a week or so in and only on one or two ‘meals’ a day, but so far so good. There have been a few heart-stopping moments when he’s bitten off more than he can chew and turned a bit pink, but touch wood we haven’t had any major choking episodes.