How to deal with defiant children

Instagram followers will know we’ve recently returned from Spain, where it’s fair to say Little B really tested our patience on the behaviour front (imagine the highest-pitch screeching you can when he doesn’t get what he wants, times it by 10 and you’re almost there).

He’s coming up to two and it’s definitely time to start disciplining him, but the question is, where do you start? BB was such an easy child and the mere threat of the naughty corner was enough to get her to stop whatever she was doing, but then she didn’t have a five-year-old sister to compete with. 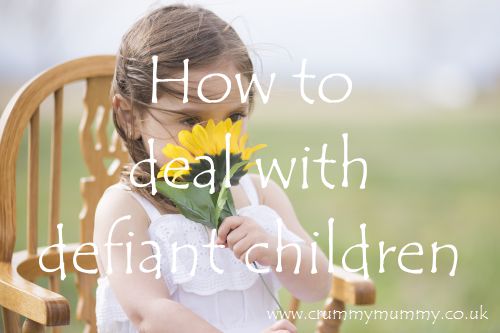 So it was rather timely when Wendy Dessler from OutreachMama got in touch and offered to write a post on dealing with defiant children. Although Little B is a long way off being a defiant child (he’s only a toddler exercising his will for the first time, after all) I can totally see how it escalates so any advice is gratefully received! Here’s what Wendy has to say:

Dealing with defiant children: what you can and cannot control

What can you, as a parent, do when your child refuses to go to school or do something that you ask him or her to do? When faced with such a situation, many parents would force their children to go. Aside from resorting to the use of physical force, how else can you make your children do what you ask? If you are raising a defiant child, things will feel out of your control. Your child will be fighting you and all authority figures at every turn. Why do parents fight their children for control?

Society puts out two completely different messages. It places high value on standing out of the crowd and individuality. On the other hand, when children make decisions that are not consistent with normal behaviour, there is a lot of pressure to conform. When your child refuses to confirm, the onus falls on you to straighten him or her out. As a parent, you can use a bribe – such as SweetServices.com sweets – to incentivise your child to act the way you want. Because kids like sweets, they might behave well long enough to get their sweets then revert to being defiant. Therefore, using incentives might not be the best way to correct them.

Parents are usually afraid of what might happen when they fail to control their kids. What will I do if my child travels down the wrong path? What will happen to him? A parent will mull over these questions. Instead of supporting your child and believing that he will learn from his mistakes, you spend your time trying to save him from himself.

It is human nature

Take some time to think about control: how it affects those around you. Listen to other people’s conversations. How often do you advise people on what to do? How often do they advise you on the best course of action to take? What you learn might surprise you. Some people just love to be in control. If you are like that, you might believe that you know what is best for others but chances are that you do not.

When you are in a dispute with your kids, you might find yourselves in a battle of wills that you have to win. It is not something that you recognise consciously, but you will be loath to cede control to a child. This is the worst way to approach a dispute between you and your child; it is not a competition. You need to speak to your kids calmly if you want to have a fruitful conversation. After all, only your child can control his own behaviour, no matter how much you scream and yell.

When it comes to your kids, what is in your control and what is not? Here are things that are in and beyond your control:

1. Your behaviour is in your control – whenever you get angry, you should react the way you would want your kids to react. Walk away or use other coping skills when you feel angry.

2. You cannot control your child’s behaviour – your power does not lie in arguing with your kid. It lies in controlling your own behaviour. Although it might feel like your child controls you on some days, he does not.

3. You can control the consequences for bad behaviour – you should let him know what will happen if he gets violent and lashes out.

Remember that how your child turns out will reflect on your parenting skills. If you choose a hands-off approach, do not complain about the results!

You can find Wendy over on Twitter at @outreachmama. Have you ever had to cope with a defiant child? What’s your advice?