Would you take your child out of school during term time even if you knew you’d be fined?

That’s what we’ve done – and we’ll be issued with a fixed penalty notice for doing so. 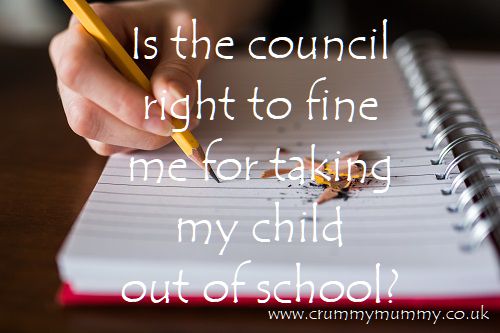 If you’re unfamiliar with the current system it used to be the case that head teachers had the discretion to award pupils up to 10 days ‘holiday’ during term time, a policy that was scrapped in 2013.

Instead any absence longer than three consecutive days that isn’t due to illness must be authorised by the school, and authorisation will only be granted in ‘exceptional circumstances’.

These exceptional circumstances seem to depend on where you live: some local education authorities appear to turn a blind eye to trips to Disneyland and sporting events while others refuse to grant the children of members of the Armed Forces holiday if their parents happen to get leave during term time.

Unfortunately our local education authority falls into the latter category, and Misery Guts and I will be slapped with a £60 fine for taking BB out of school during term time. Each. And we’re not even going on holiday.

Of course we could have said nothing and called her in sick every day, but she’s at a Catholic school and that would hardly be in the spirit of things, plus I know BB will proudly tell her teacher and friends exactly where she’s been. And proud she should be too.

Her daddy is running the Marathon Des Cote, a 186-mile foot race along the Pembrokeshire coast to raise money for people with type 1 diabetes, an event which happens to take place during Diabetes Awareness Week. The charities he’s running for include T1 International, which saves the lives of type 1 diabetics in parts of the world with no access to insulin. To put it in context, the life expectancy for a baby with type 1 diabetes in some parts of Africa is less than eight months.

It’s a cause very close to our hearts. Misery Guts was diagnosed with type 1 diabetes when he was 12, meaning his pancreas produces no insulin to turn his food into energy and he must inject it instead. 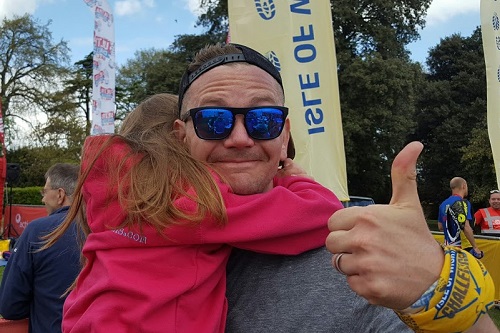 The ramifications are huge – he injects insulin at least five times a day and must test his blood sugar levels up to 15 times a day just to keep his body running as it should. Diabetes governs pretty much everything he does: what he eats and when, what he drinks and when, how he sleeps and how he feels – taking a huge toll on his physical and mental health and affecting every member of our little family in one way or another every single day (I’ve written more about what it’s like for us as a family living with type 1 diabetes in my post Type 1 diabetes and us).

It’s not his fault: type 1 diabetes is a disease for which they don’t really know the cause, and there’s currently no cure either. But with more funding, research and support, there could well be a cure for type 1 diabetics across the world in our lifetime.

In the meantime, Misery Guts needs me and a team of supporters at check points along the route of the Marathon Des Cote with medicine and supplies as it’s simply not possible for him to carry everything he needs for the duration of the race (instructions for the uninitiated members of our support crew include ‘if I’m unconscious or fitting inject me with glucagon and call an ambulance’). This isn’t a fun run, it’s a potentially life or death situation.

So we’ll be taking BB out of school for four days so that I can be there to do the necessary. He’ll be setting off at 4am every morning for three days and running up to 67 miles a day – a challenge to test the endurance of the most able-bodied Olympian, never mind a 40-year-old dad of three with a chronic disease.

Another weekend & another ultra marathon for Misery Guts – this time 37 miles across the Surrey hills. As always we’ll be there on the side lines! #family #fun #run #runner #running #dadswhorun #ultramarathon #oureverydaymoments #documentyourdays @diabeticdadruns @surreyhillschallenge

Of course I understand there need to be rules when it comes to term time ‘holidays’ and indeed I think there should be, but the system seems to be an arbitrary one which varies depending on where you live. It does seem unfair that some parents can go to Disneyland for two weeks without being charged a penny yet we’re absent for four days helping a daddy who’s trying to change lives and will be fined £120 for doing so.

Is the council right to fine me for taking my child out of school? On paper, yes: there’s no family emergency and no-one’s died (or not yet anyway – I’m hoping the race doesn’t finish Misery Guts off!) so our trip doesn’t constitute ‘exceptional circumstances’.

But do I think the council is right to fine me for taking my child out of school? No. I think the 10-discretionary-days-a-year policy was a much better one, one that recognises life happens outside of the school holidays.

The local education authority might not deem our trip ‘exceptional circumstances’, but it’s pretty exceptional to us. And it’s a lesson I know will last BB a lifetime. 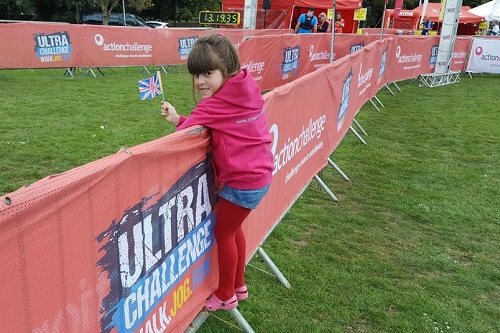 If you’d like to know more about Misery Guts’s mission to run the Marathon Des Cote (a ‘training’ run for his ultimate goal: the 150-mile Marathon des Sables in the Sahara Desert in 2019) he’s blogging about it over at Diabetic Dad Runs. And if you’d like to donate or find out more about the charities he’s supporting you can visit his JustGiving page here.