Class birthday parties have a lot to answer for

It was only a matter of time. Three quarters of the way through BB’s first year at school and there’s been a birthday party she wasn’t invited to.

It’s not that the whole class had been invited except her – around a third of the class got invites, but she wasn’t one of them – and it just so happened that that third who were invited are friends she plays with the most. 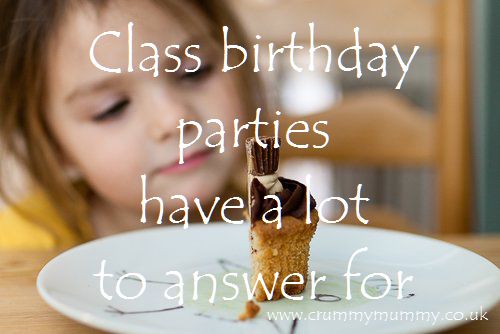 She came out of school sobbing because her friends had been given an invitation and she didn’t get one, big fat tears of injustice rolling down her cheeks and off her chin. I can still hear her gulps now, and I wanted to cry too.

It’s not that I disagree with the mum’s decision not to invite the whole class – I think it’s totally up to the parents whether to invite one child or 30 – and let’s face it, birthday parties are expensive business. It’s just the party politics that class birthday parties conjure up.

I did my best to explain to BB that not everyone had been invited, but she just kept repeating, over and over again in a querulous voice, that all her friends had been invited ‘but they didn’t invite me’.

Misery Guts is of the opinion that that’s life, and she’ll get over it, but at four years old I think it’s a bit of a harsh lesson. I’d like to have spared her for a little while longer.

I dreaded collecting her on the Monday after the party in question, but luckily it hasn’t been mentioned since. I’m quite sure she’s still thinking about it though.

A few days later one of BB’s friends bounded out of the classroom waving another birthday party invite, and as I saw BB clock what her friend was holding my heart momentarily sank as I waited to gauge her reaction. But this time she beamed and, puffed up with pride, told me that she had been invited too.

There’s no doubt about it: it’s hard being four years old.

But sometimes it’s harder being the mummy who has to pick up the pieces.

Do think class birthday parties are a good idea? Do you have a child who has been excluded from one? I’d love to hear your thoughts!