Four weeks. That’s how long it’s been since I stopped breastfeeding the youngest.

And it’s been the most challenging four weeks of her entire life. 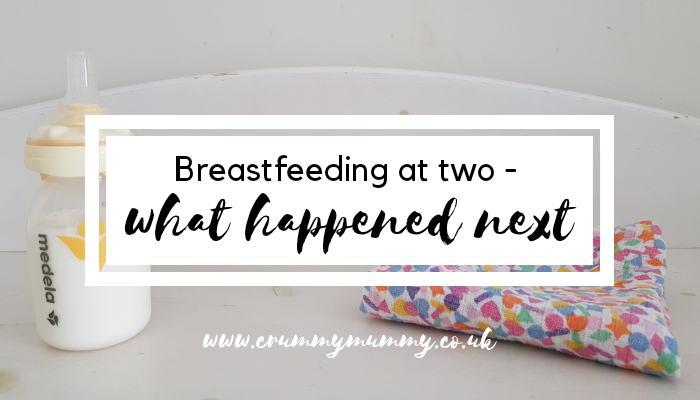 After writing about breastfeeding at two – now what? following my decision to stop breastfeeding when she turned two a number of breastfeeding mamas got in touch also asking how on earth you go about stopping feeding a toddler.

So, a month on I thought I’d share a little mum to mum update on how it’s going – and it’s fair to say there have been highs and lows!

Week one started off well enough. We packed the kids off to grandparents for a few days during half term to help break the breastfeeding cycle and she was fine – she was happy to take milk from a bottle and didn’t cry for me once. When she came home I told her my milk was ‘all gone’, which she seemed happy to accept – until bedtime.

After exhausting what was left of frozen breastmilk in the freezer – delivered in a shiny new beaker by daddy – it was cow’s milk or water. Which is when the meltdowns began. The first night was undoubtedly the worst. On a scale of one to 10 I’d say her distress was probably only about six, the trouble is she can properly scream, and I mean ear-piercing screams.

*Breastfeeding at two* ‘A bit odd’ – that’s a comment I read on a social media feed this week in response to a post by a mum breastfeeding her toddler Odd or not, that’s where we’re at too and the question is: now what? I have absolutely no idea how to go about weaning her off, but I do know that the time has come. The thing is, though, while there’s plenty of advice for breastfeeding mamas with two week olds & two month olds, there’s not so much for breastfeeding mamas with two year olds like me ‍♀️ So I asked @medela_uk’s lactation consultant Sioned Hilton all the questions I can’t seem to find the answers to – like exactly how to go about stopping & whether my previously equal-sized boobies will ever return to their normal size or remain mahoosively imbalanced for the rest of eternity Her expert advice is over on the blog today – link in bio! #MedelaMums #breastfeeding #breastfeedingmamas #brelfie

It was so bad the lady from downstairs rang our doorbell at 4.30am in the morning to complain. I didn’t answer it. The following day I was forced to put a note through the door of our nearest neighbours explaining the situation and asking for them to bear with us.

By the end of the week she wouldn’t entertain daddy and his shiny new beaker, but she was happy to settle with me and a bottle of milk. Which is when I realised breastfeeding and co-sleeping are in fact two totally separate issues. And we’ll deal with the co-sleeping later.

Oh, and I sent some breastmilk away to be made into a piece of jewellery. And I may have wept in the loo once. Or possibly twice.

A glimmer of hope came in the form of an email from nursery experts Cheeky Rascals asking if we’d like to review one of their Aloka SleepyLights night lights. The lights come in a range of designs – think butterflies, giraffes and fairies – with colour changing LED lights that your child can control themselves with a remote control. 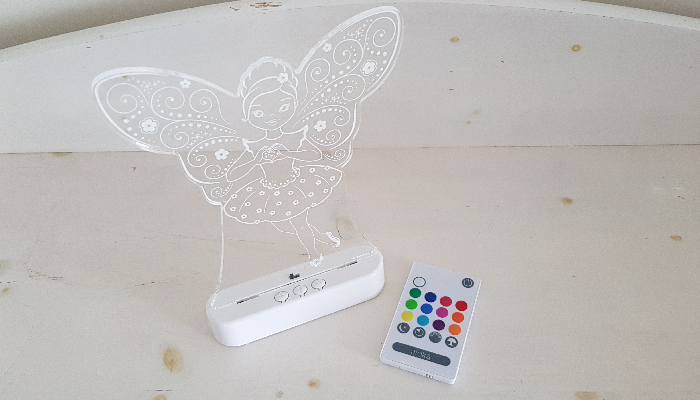 It turns out this is the perfect distraction for a toddler used to being fed to sleep: there are a rainbow of colours which she can change herself, and a built-in sleep function so the light stays on throughout the night. They cost £29.99 but when it comes to weaning a toddler off the boob ours has, quite frankly, been priceless. 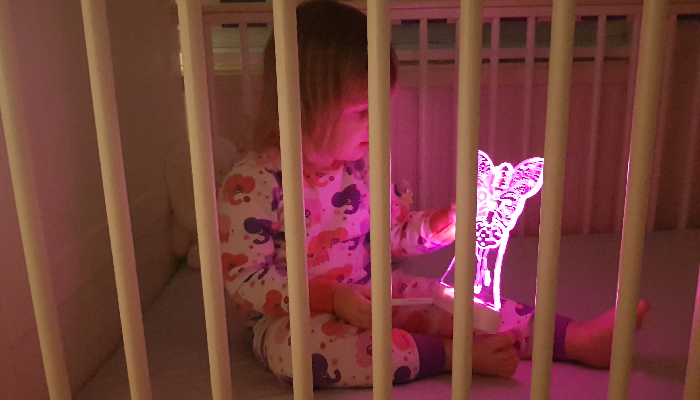 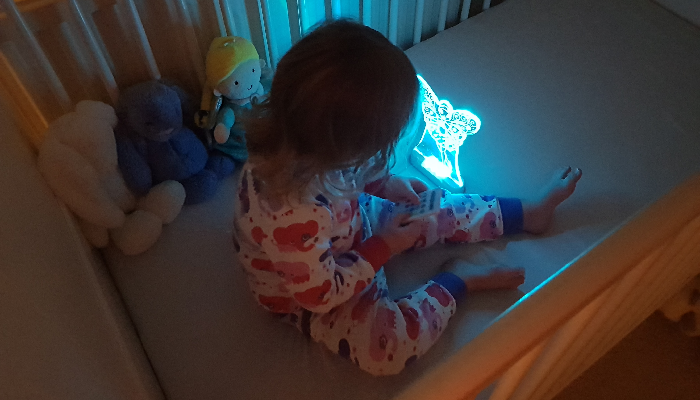 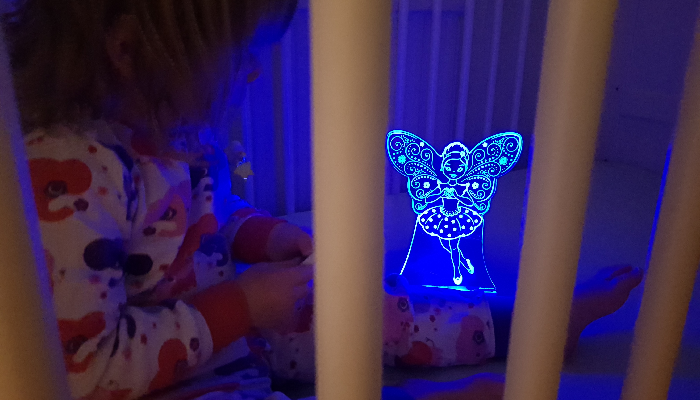 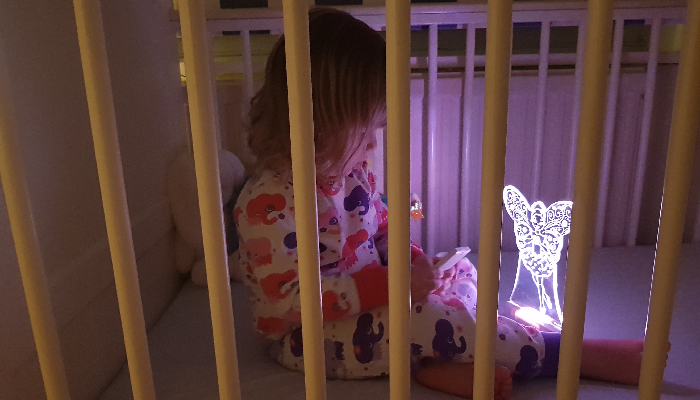 There’s was a lot of snacking going on – which made me realise just how many times a day she’d come to me for a ‘top up’. 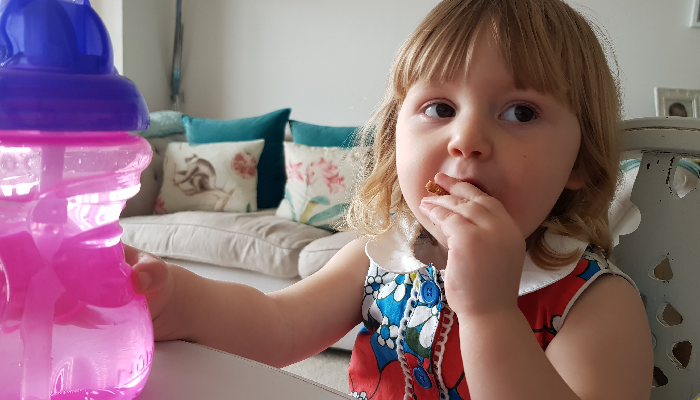 There was also a lot of milk drinking going on. And it had to come from our Medela Calma bottle, which mimics the breast with its special teat. 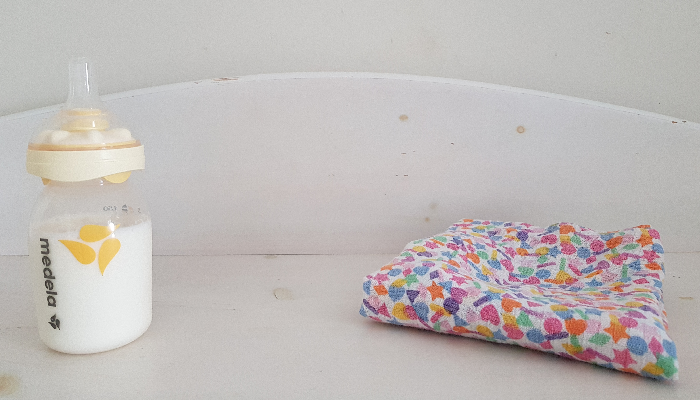 We seem to be out the other end! Even if she does spend rather a lot of her time like this – with one hand firmly planted down my top. 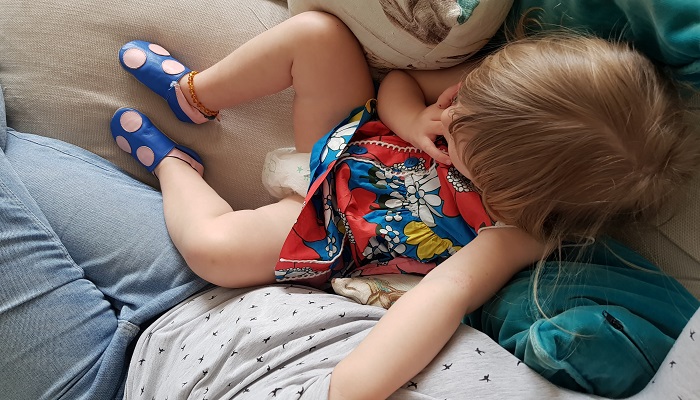 I’m guessing she’ll grow out of it, and on the up side she has stopped asking for my milk on a daily basis. She accepts a bottle of milk instead of my milk during the night, and with the help of her SleepyLight seems to have forgotten all about being fed to sleep.

Which I guess means that’s it – over and out. So if you’re reading this because you’re thinking about or trying to stop breastfeeding too, that’s how we’ve gone about it. I don’t profess to be an expert and I’m sure there are right ways and wrong ways, but this is the way that’s worked for us. Even if we have wound up the neighbours in the process.

735 days. That’s how long I breastfed this one for, & it’s now been 7 days since I stopped. After more than two years & zero unbroken nights the time is definitely right, but that doesn’t make it any easier, especially since it’s probably the last time I’ll ever do it I’ve put away all my nursing bras, I’ve wept in the loo & I’ve sent some of my last breast milk away to be made into a piece of jewellery I can keep forever I’ve also realised just how many #brelfies I took & say what you like about the #brelfie, I’m glad I’ve got mine ❤

We were gifted the Aloka SleepyLight included in this post. As always all opinions are my own and based on my own honest experience, and I would never recommend a product we don’t truly love ourselves.

10 things they don’t tell you about raising girls