Bog off Janet Street-Porter: I’m proud to be a member of the aisle-clogging pushchair army 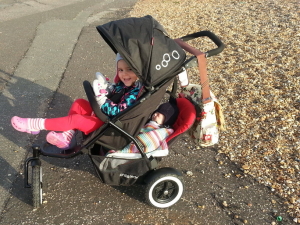 So Janet Street-Porter wants to ban kids from cafes and restaurants. Apparently she’s fed up with the ‘cacophony’ and ‘stench’ generated by what she calls something small, cross and wearing a nappy (she means a baby) in a withering attack on the aisle-clogging pushchair army (that’s you and me).

As someone who often works from coffee shops during the week I can see both sides of the argument, but if you haven’t already gathered I’m incensed.

Aside from the fact I’d rather not eat my sushi or drink my latte in the presence of something tall, cross and wearing a disapproving frown (her), where would we be if we started posing restrictions on who can and cannot frequent public places?

We’re already stuck in the dark ages when it comes to kids in public. If you go to most countries in Europe after dark you’ll find kids in cafes and restaurants – where parents go, kids go too. That’s just how it is. Suggesting babies and children should be seen and not heard is positively Dickensian.

Of course only a childless person would suggest banning children from cafes and restaurants, and it’s interesting to note Janet Street-Porter doesn’t have children of her own.

That NCT meet-up at Costa or treat night at Pizza Express in which you won’t have to go shopping, prepare the food and clean up afterwards is a life-line. Literally.

And what she fails to appreciate is that we, the aisle-clogging pushchair army, are raising the teachers, doctors, nurses, magistrates, engineers and prime ministers of the future. How rounded will they end up if their social skills are developed entirely within the confines of home and school with a sleep-deprived parent in charge?

It’s a shame because I’ve always quite liked Janet Street-Porter, but I’m afraid this is one rant me and my small, cross and nappy-wearing offspring can’t forgive. I’m proud to be a member of the aisle-clogging pushchair army.

Do you or did you have a favourite baby outfit? My