I’ve been running out of things to feed BB. She’s hungry ALL the time. She’s even been waking up in the night saying she’s hungry.

She hasn’t got worms (I checked) so I can only put it down to a mammoth growth spurt. 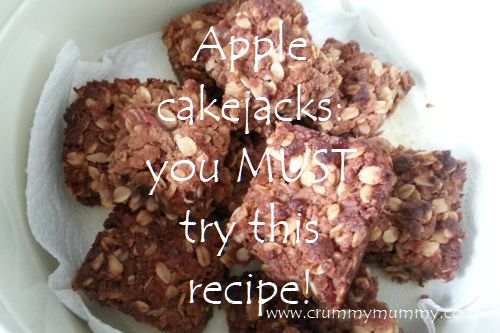 I’ve upped the portion sizes of breakfast, lunch and tea but even so pudding after tea has been going on and on and on with repeated requests for ‘something else’.

After finding myself resorting to biscuits on one too many occasions I’ve been baking some healthier alternatives in a bid to fill her up, and my latest discovery is a hit: apple cakejacks.

They’re basically a cakey sort of flapjack with fresh apple through the middle and lots of cinnamon. Even better, they’re SUPER easy. I found the recipe in Mumsnet’s Top Bananas cook book, but thought I’d reprint it here in case you don’t have a copy.

1 and a half apples or pears, cut into thin slices

Melt the butter and sugar in a pan. Remove from the heat and stir in the flour, oats and cinnamon. Spoon half the mixture into the tin, cover with the apples or pears, and spread the rest of the mixture on top. Bake in the oven for 25 – 30 minutes. Cut into squares and allow them to cool and harden in the tin.

That’s it! And they’re absolutely delicious (I’ve only eaten two since I baked them. Honest…) 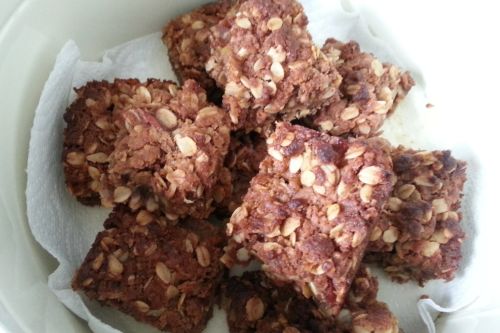