You know the ones I mean. The ones you can hear coming before you can see them. The ones who cause some sort of disturbance as soon as they enter a room. The ones you swore you’d never become. 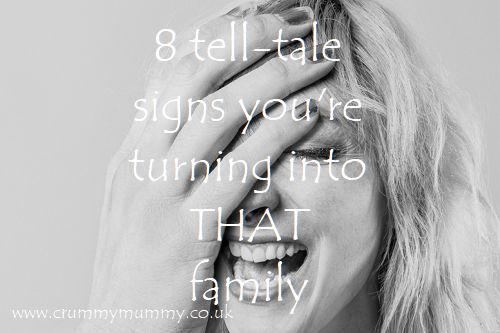 Well we’ve turned into THAT family.

To be honest the warnings signs have been there for months, but it was only when we went out to a restaurant to celebrate Little B’s third birthday that the true horror really hit home.

The fact we’re now outnumbered since the arrival of baby number three probably has a lot to do with it: if all three kids kick off at the same time the chances are there’s going to be one you have to leave to it while you’re sorting the other two out.

Even so we managed to cause such a commotion on our latest outing that the appeal of going out for a meal you don’t have to cook or clear up after isn’t as attractive as it once was. Here’s why.

1. Diners on the tables nearest to you pay up and leave within 10 minutes of you sitting down. It’s possible they had actually finished their meals and were about to leave anyway, but the chances are they want to get as far away from you as possible as fast as possible.

2. You require a table with plenty of extra space. And if there isn’t one they have to rearrange the furniture. Not only have you brought the pushchair and the car seat with you in case they fall asleep (ha – good luck with that one!) there’s the high chair that has to be at least a foot away from the edge of the table so the baby is out of swiping distance.

3. You open your mouth and your mum falls out. You find yourself saying things like ‘turn the volume down’ and ‘other people are here to have a quiet meal and don’t want to hear your voice’.

4. There’ll be some sort of spillage. And I don’t mean a little splash – I mean the sort of spillage that requires reams and reams of the kitchen’s catering-size blue roll. It was BB filling Misery Guts’s glass with water from a jug that ticked this box on our latest outing. She kept on pouring, sending water cascading all over the tiled floor, which happened to be the waiters’ route from the kitchen to diners.

5. The kids take it upon themselves to display feral behaviour you’ve honestly never seen before. Discovering the older two were chasing a discarded dough ball around the restaurant floor had to be the low point of the evening.

6. The kids will say something they shouldn’t. VERY loudly. Like ‘Daddy are you sure you can drive us home when you’ve had two glasses of beer?’

7. Despite using almost a whole pack of baby wipes to clear up discarded food, despite putting all the crayons back in their pot and despite helping to stack the plates, your table still looks like a bomb’s hit it.

8. You leave an overly generous tip. Not because the service was anything special, but in recognition of the trail of destruction you’ve left in your wake and the general inconvenience caused to all.

Have you been out for a meal with the kids in tow recently? Does any of this sound familiar? I’d love to hear whether you’re in danger of turning into THAT family too!