If the words ‘flying’ and ‘kids’ bring you out in a cold sweat, you’re not alone. And I’m not referring to parents.

Apparently 70% of us support the idea of child-free areas on planes, and a third of us would happily pay extra to travel on a completely child-free plane. (For the record, I wouldn’t. Who are these people?) 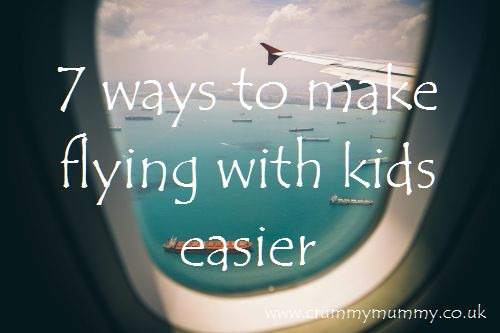 Statistics like that don’t exactly make it easy if you happen to be parents who, shock horror, would like the sort of holiday that involves getting on a plane.

We’re off to the Christmas markets in Germany for a long weekend next month, and I’m already dreading the flight even though Little B is now two and will have his own seat for the first time. (Which is just as well as I’ll be almost eight months pregnant).

Memories of the time I had to ram BB into a seat as we descended because she wouldn’t sit down and she hit her chin on the arm rest sending blood spurting everywhere still haunt me, so I’ve been thinking about how to make the journey as straightforward as possible. Forewarned is forearmed and all that.

1. Take a buggy. I don’t know about you, but I always feel like I’ve walked miles through the airport by the time I actually get to the plane. So imagine what that must feel like for little legs. You can take buggies right up to the plane door, and they’ll either be waiting for you on the runway when you disembark or be the first on the luggage carousel when you get off because they were last on the plane.

2. Plan your flight time. Of course this is easier said than done, but if possible try and plan your flight time around your children’s preferred sleep times. There’s nothing like a sleep deprived child in a pressurised cabin to turn a journey into a nightmare.

3. Take as many reinforcements as possible. By this I mean other adults, not weapons (although admittedly weapons would come in handy). I’ve said it before and I’ll say it again – more hands make light work. By far the worst flights I’ve had since being a mum have been when I’ve been on my own. Having Misery Guts there too, and even better friends and family, really makes a difference.

4. Pack as many snacks and toys as you can cram into the hand luggage. Snack-wise I find the smaller the better because it takes them longer to eat. Raisins, fruit drops and packets of little rice cakes all work a treat for us. Toy-wise, don’t do what we did on our last flight and let them take anything with an annoying or repetitive tune. Your fellow passengers will not thank you for it.

5. Help them with the discomfort of cabin pressure. This is where the snacks come in handy, and the chewier the better. My two aren’t usually allowed them but last time I gave them hard-boiled lollipops to suck and that worked a treat too.

6. Forget about what other people think. The reality is there are people who don’t much like travelling alongside kids, whether they’re being loud and annoying or as good as gold. Don’t appease passengers who glare at you or your children because your kids have as much right to be on board as they do.

7. Make the journey to your final destination as easy as possible. Once you’re off the plane, you’ve reclaimed the buggy, got the bags and everyone’s been to the loo the last thing you want to be doing is finding bus stops or navigating unfamiliar territory, especially if you’ve just flown half way around the world. For example, if you’ve just stepped off a plane from London to New Zealand you could book a car hire when you’re in Christchurch to make things easier.

Have you been flying with your little ones? How did it go? If you have any top tips I’d love to hear them!