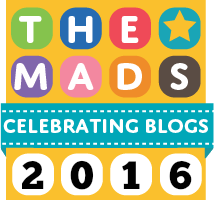 Nominations are officially open for Tots100’s annual MAD Blog Awards. If you haven’t heard of them before, the MAD (mum and dad) awards are the biggest of their kind in UK parent blogging and recognise the excellence of blogs in a range of categories.

When I first started blogging in 2013 – totally wet behind the ears – I put myself forward for a handful of awards like this, but when my entries went nowhere I quickly became disheartened and dejected and as a result I haven’t put Crummy Mummy forward for an award in more than three years.

There are so many brilliant blogs out there with amazing content, all-singing-all-dancing You Tube channels, perfectly crafted Instagram accounts and thousands more followers than me that there just didn’t seem any point in trying to compete.

‘What’s the point?’ I’d think when an announcement about the latest event popped into my inbox, ‘I’ll never win’.

But this year, now that BB is at school and is constantly overcoming new hurdles, I’ve been reminded that such a defeatist attitude never got anybody anywhere.

In the last six months alone, since becoming self-hosted and really honing what Crummy Mummy is all about, I’ve seen my blog stats more than double, gone from not even being in the top 1,000 parent blogs to being ranked in the top 500, grown our Facebook following from under 100 ‘likes’ to more than 1,700 and increased my Twitter following from 200 to more than 1,700. Oh, and I started vlogging. All of which I think is something to be proud of in such a short space of time.

If you’ve been feeling like me – that it’s not really worth entering blogging awards – here are 5 reasons to enter Tots100 MAD Blog Awards too:

1. There are 14 categories to choose from, which means unlike some blogging awards there’s bound to be a category which fits your blog perfectly.

2. More categories mean there’s a greater chance of becoming a finalist or even winning. Fourteen categories is quite a lot!

3. One finalist in each category is chosen by the judging panel, not by the number of nominations they receive. So while you might think the blogs with bigger followings will get the most nominations, there’s no reason why your content won’t catch the eye of the judges.

4. You’ve got to be in it to win it. Don’t beat defeatist like I’ve been over the past few years – the simple fact is that if you don’t enter then you can’t win.

5. You deserve it! All those evenings spent tapping away, all that time wracking your brains for the perfect blog post title and all that time taking and editing pictures: of course you blog because you love it, but a nice shiny award in recognition of all your efforts would be jolly nice too!

So I’ve nominated myself, and I’ve also nominated all of my favourite blogs too.

If you enjoy what you read here I’d be so so pleased if you would nominate me too! I’ve put myself forward for three categories:

Blog of the year, best pre-school blog and best writer.

But if you think I best fit another category that’s fine too! It takes just two minutes to nominate me (it really does!) and all you have to do is click on the badge (below) and enter my blog URL.

Thank you so so much in advance!