But what did come as a surprise to me is the weird ways pregnancy changes your hair. Or my hair anyway. 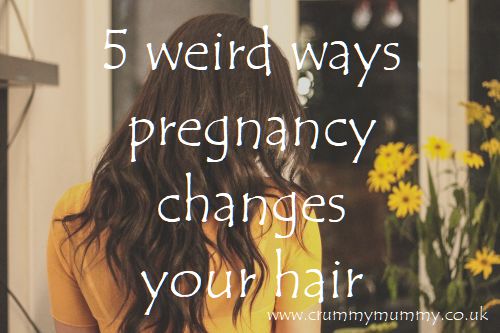 As soon as those little blue lines first appeared on the pregnancy testing stick my hair quite literally took on a life of its own – and six years and three babies later it’s never been quite the same again.

1. The frizz. I’m talking about the baby hair that suddenly appears on your hairline and above your ears, quickly spiraling out of all control. At one point the only way to beat mine into submission was by straightening it, but rather than hanging down and blending in with the rest of my hair it would stick out at all angles which on a bad new-mum-I’ve-only-had-two-hours-sleep day served to make me look even more crazed and deranged than usual.

2. The fall out. Somewhere between four and six months post-partum all the hair your body held onto during pregnancy starts falling out. And I don’t mean a strand here and a strand there. I mean fistfuls of the stuff. It’s really quite frightening.

3. The patches. This is a new one on me and possibly the result of having had three babies, but I was absolutely horrified to discover, when viewing the results of a mum and baby photoshoot with Littlest B, bald patches on my head. Bald patches! Why didn’t anyone tell me? I’ve got absolutely no idea if this is a temporary thing or whether the hair will grow back – I guess only time will tell!

4. The sheen. I don’t mean a nice, healthy, glossy sheen, oh no no no no no. I mean a teenage-like, greasy, oily sheen. And the more you wash it, the worse it gets. Thanks Mother Nature.

5. The mum bun. Numbers one to four all result in number five: the safe, foolproof mum bun to be found on me pretty much every day of the week. It’s quick, requires zero styling, (largely) hides the frizz and the sheen and you can comb over the patches. Oh, and best of all they can’t pull it.

Did your hair change after you became a parent? Did you experience any of these symptoms and has your hair recovered now? I’d love to know I’m not the only one!