Before you became a mum (or dad) did you used to think about the sort of parent you’d be?

I did – and I also used to think about the sort of parent I wouldn’t be too. 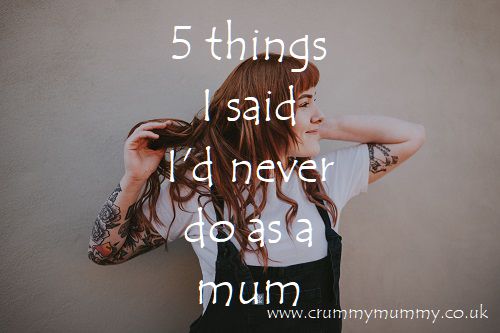 From cooking more than one meal to having a mountain of plastic toys in the living room, there are so many things I said I’d never do as a mum – until I became one, of course.

Now I’m a mum of three I look back on first time mum me and realise how naïve I was – and why you should never ever say never. In no particular order, here are 5 things I said I’d never do as a mum.

1. Be slave to a routine. I used to turn my nose up at people who turned down invitations because it clashed with nap time, or left an event early because they didn’t want the baby to fall asleep in the car on the way home. Until I discovered that routine is everything.

2. Lie. I’d be the sort of mum who is open and honest and always tells the truth, I told myself. Until I discovered lies and fibs are currency when it comes to parenting. I don’t think a day goes by when I don’t lie or fib to one of them about something. Like swearing blind a swimming costume is clean even though I fished it out of the dirty laundry basket where it had been languishing since last week’s lesson. The truth just isn’t worth the meltdown.

3. Let myself go. I wouldn’t be the sort of mum who ‘forgets’ to brush her hair, or trades signature jeans for dungarees or worse, elasticated leggings. Until I discovered what sleep deprivation is actually like, and that generally speaking it’s me, the house or the kids – and usually the kids and the house win. Plus dungarees and elasticated leggings are super comfy.

Can I breastfeed in *THOSE* eBay dungarees? (If you’re a member of the Can I Breastfeed In It Facebook group you’ll know what I’m talking about!) Yes I can! I too look like a CBeebies presenter but for £5.66 you can’t go wrong & as Misery Guts said, what’s wrong with a CBeebies presenter? What indeed! #breastfeeding #breastfeedingmama #breastfedbaby #thismamaloves #coolmumclub #fashion #mamafashion #baby #instababy #socute #oureverydaymoments #documentyourdays #snaphappybritmums @britmums

4. Have a child with a snotty nose. You know the sort I mean, with green bogey permanently encrusted about their face. Why don’t the parents just wipe it I used to think? It’s not that difficult. Until I had one, then two and then three of mine own and discovered there’s precious little you can do about a snot monster who doesn’t like wiping (them I mean, not you).

5. Be a push over. I wouldn’t give in to pester power, emotional bribery, or begging. Until I discovered you pick your battles, and sometimes the path of least resistance is the best path to take.

Is there anything you swore you’d never do before becoming a parent that you now do? I’d love to know what it is!

Are you a naked house?