5 simple ways to stick to your goals 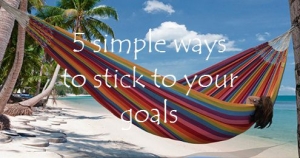 Apparently today is Blue Monday, the third Monday in January which the powers that be claim is the most depressing day of the year. Christmas is over, there’s months to wait before the possibility of another holiday and cracks are starting to show in your new year resolutions.

I’m not a big fan of new year resolutions for the simple fact that an ‘all or nothing’ approach seems to set you up to fail. This year I set myself some ‘goals’ instead, because goals sound nicer and more achievable. Afterall, you can’t break a goal.

The good thing about goals is that it’s not the end of the world if one day you don’t manage whatever it is you’re trying to achieve. I’m trying to cut down on alcohol, go to bed earlier and eat a little healthier by cooking from scratch more often and being more aware of sugar, all of which are easier said than done.

So in order to help achieve my goals I’ve devised an action plan of simple ways to stick to them and thought today – the most depressing day of the year – might be a good time to share it.

Here are my 5 simple ways to stick to your goals:

By the end of last year we were often eating dinner after 9pm after sorting the kids out, getting them to bed and making our own meal, which meant bedtime was getting later and later. In order to go to bed earlier I’m trying to plan the day better, making sure our main meal is underway during the day so it’s ready to eat as soon as the children are in bed. The slow cooker is great for this. Make sure you have everything you need in order to be able to carry out your goal.

2. Replace the old habit with a new one

There’s no doubt drinking for me is a habit: the kids are in bed, the toys are cleared away and I can finally sit down – meaning a nice cold glass of wine would be lovely thank you very much. So if I’m trying to cut down on alcohol there’s no point putting the kids to bed, clearing the toys away and sitting on the sofa as usual because I’ll then be drumming my fingers. I’ve been trying to replace the old habit with a new one instead by having a nice long bath and lying on my bed and reading afterwards – which is equally relaxing!

3. Give yourself time to adapt to your new routine

They say it takes three weeks to break an old routine and create a new one so go easy on yourself – these things take time!

Don’t beat yourself up if one day you don’t manage to fulfil your new goal. Life happens, things get in the way and it’s not always possible to do the things you’d like to do. Try to forget about it and just start as you mean to go on as soon as possible.

Make sure you reward yourself for sticking to your new goal. And I don’t mean if you haven’t had a drink or bar of chocolate for a week reward yourself with a bottle of Pinot or a giant bar of Dairy Milk. I’m saving the money I used to spend on wine for a different treat – for example, the cost of two bottles of wine is the same as a file & polish at my local beauty salon, and six bottles of wine would pay for a facial. So, in theory, every couple of weeks I can reward myself for not drinking during the week with a treatment.

If only I could manage not to drink during the week…

🤗 Hugs 🤗 So hugs are officially back on the

When your bestie gets a new set of wheels 🚲 Thi