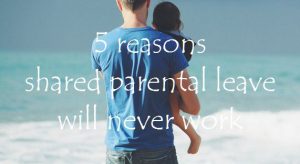 It’s been a year since shared parental leave came into force in England, Scotland and Wales and apparently just one in every 100 dads – that’s 1% – has taken advantage of the opportunity. I can’t say I’m surprised.

This time last year I wrote a blog post about why it would never work in our house and would probably end in divorce because I simply couldn’t cope with the crunchy crotches my pants would have from Misery Guts not shaking out the wet washing properly before hanging it out, and I’d end up having a nervous breakdown from all the crumbs and spillages I know I would find on the kitchen work surfaces when I got home from work.

But apart from the domestic side of things there are 5 reasons why I think shared parental leave will never work:

1. Employers aren’t offering dads the same advantageous maternity packages that they’re offering mums, such as 90% of your pay for the first 16 weeks of leave, so many families simply can’t afford to take them up on the offer.

2. The process of applying for shared parental leave – when two parents share the 50 weeks maternity leave after a baby is born – is so convoluted and confusing that many families simply don’t know how to go about doing it. What’s more, many HR departments have criticised the complexity of the new law and reported not knowing how to administer it.

3. Dads are afraid of applying for shared parental leave for fear of being viewed less favourably than other male colleagues and it affecting their future career prospects. That glass ceiling has just got bigger.

4. Mums don’t want to hand over the baby. I don’t know about you, but in the first year I started to get twitchy if I’d been apart from mine for more than a few hours. As appealing as it sounds, I wouldn’t really have wanted to leave mine in the capable hands of Misery Guts for eight or nine hours a day during the working week.

5. Dads don’t want to be handed the baby. If I had a pound for every time Misery Guts – elbow deep in baby poo with a screaming baby in his arms and snot on his shirt – has muttered ‘I don’t know how you do it’ I’d be very rich indeed. Like many dads, he freely admits he can’t imagine anything worse than being at home all day with the kids.

I know just one couple who have taken up the opportunity of shared parental leave in the last year, and I asked them to sum up in five words how it went.

I think shared parental leave is a nice idea in theory, and it’s nice to read the stories of those for whom it has been a blessing, but unless these issues are addressed I can’t see it taking off in reality. What do you think? Is it something you’d consider?

🖤 Why I don't wear black 🖤 After buying a ne