They say nothing is certain in life but death and taxes.

I’d argue that there are other things too – like the fact you’ll always find a bottle of white wine in my fridge, you’ll never, ever be quite rid of the Velcro fluff that accumulates in their school shoes and the tea and toast they give you after giving birth is the best you’ll ever taste – but it’s probably fair to say death and taxes are the important ones. 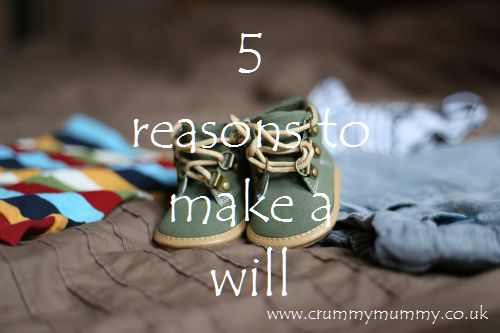 When BB was born one of the first things we did was take out life insurance – admittedly this was partly owing to the fact the insurance company in question was offering £80 M&S vouchers as an incentive (don’t judge me!) – but mainly because it suddenly dawned on us we had this little scrap of a thing solely dependent on us.

The thing is, six years and two more children later, that’s as far as we’ve got. We’ve never made a will, so if we were both to die and the insurance were to pay out we’ve given no proper indication of what should be done with it – or the kids.

According to The Law House wills solicitors making a will should be a top priority if you’re a parent, and here’s why.

1. The kids. If you die without leaving a will and your children are under 18, they could end up in foster care while a court decides who should look after them. But if you’ve left a will then you can appoint the person or people you want to raise your children – or, to put it another way – the person or people you don’t want to raise your children. According to The Law House in 1919 an American millionaire made a will stating that the beneficiaries wouldn’t inherit until 21 years after the death of his last living grandchild – charming!

2. Peace of mind. You can spell out exactly what you want to happen after you die. If you die without leaving a will there’s no guarantee your wishes will be carried out, plus you’re leaving a real headache for family who will be left to try and guess what you would have wanted.

3. You can leave a gift. Like money to a cause close to your heart, or even your pet! According to The Law House the richest animal in the world is a dog named Gunther IV who inherited £90m from his father who was left the fortune by his German owner. Don’t get me wrong I love pets – indeed our two house cats Eddie and Daisy even feature on our meet the team page because they’re part of the family too – but I do think that’s barking mad, as is the cat who was left £15m and the chicken who was left £6m.

4. Saving or reducing inheritance tax. It is possible – even though we’ve already established taxes are a certainty in life!

Have you made a will or, like me, is it something you just haven’t gotten around to yet? Do you have a pet and would you remember them in your will? I’d love to know your thoughts!