Is it me or does everyone celebrate their blogiversary in January?

Everywhere I look people seem to be marking the birthdays of their blogs and guess what – this week it’s mine! 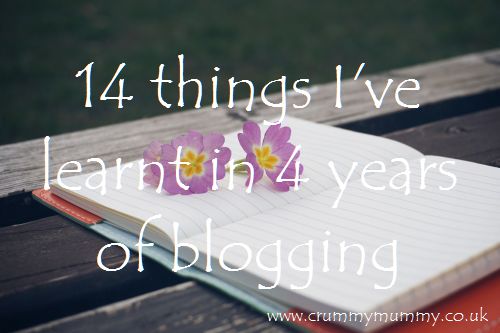 I guess the new year is the perfect time to start a new project like a blog, and I’ve now been blogging for four whole years.

When I first started out on January 20th 2013 I had no idea what I was doing, and four years on it’s fair to say we’ve come a long way. I know more about html code than I ever dreamed possible, the blog quite literally puts food on our table and we’ve had some amazing experiences, like holidaying in Majorca with Mumsnet and caravanning in Devon with Hoburne Holidays.

It’s been a steep learning curve too, so I thought I’d share some of the things I’ve learnt in this time.

1. Content is king. Back in my pre-baby days I was news editor on a series of newspapers and I used to say this over and over again to trainee reporters. It doesn’t matter how good something looks, the content is the most important thing. So write to the very best of your ability with absolutely no spelling mistakes, grammatical errors or sloppy copy.

2. Bash it out. I also used to say this to reporters and it’s probably my favourite catch phrase because it’s so true. It doesn’t matter if you don’t know how to start, develop and end what you want to write, just write it. Over-thinking will get you nowhere: just bash it out and fiddle with it afterwards – the story will come.

3. Never let the truth get in the way of a good story. I don’t mean tell a complete lie, I mean if a blog post isn’t quite going in the way you hoped, bend it a little so it will. Otherwise known as bejewelling the elephant.

4. Consistency, consistency, consistency. When I first started blogging I’d publish a post here and a post there, sticking to a loose schedule, but if something came up and I didn’t post I wouldn’t worry about it. But if you want to turn your blog into a business and monetise it you need to be consistent – publish on the same days at the same times each week, and don’t veer from the schedule.

5. There’s only a matter of seconds between PR triumph and PR disaster. Like the time I forgot to mention my blog when I appeared live on This Morning to talk about whether it’s ok to wear pyjamas on the school run – and the blog was the reason I was on there in the first place.

6. You learn from your mistakes. After the This Morning debacle I made sure to go straight in with a plug for the blog the next time I was on TV – this time on Good Morning Britain talking about wheelchairs and buggies on buses. And guess what? My stats went mental.

7. Promote promote promote! It took me about two years to realise that I needed to spend as much time, if not more, promoting a blog post as I did crafting it. Because what’s the point in writing something if you’re not going to tell anyone it’s there?

8. It’s not all about the stats. Numbers do not prove your worth as a blogger. You might not have the highest Tots 100 ranking, the biggest number of Twitter followers or the greatest number of Facebook fans, but that doesn’t mean your blog isn’t great and you can’t monetise it. While many brands want to work with the ‘big hitters’, just as many are looking to work with bloggers with a smaller, active, engaged audience.

9. Keep to your word and be professional. If you say you’re going to do something, do it. And when you’ve done it, make sure you send the PR or whoever you’ve liaised with the link to the said blog post and all your social media shares. Don’t burn any bridges because you never know where that PR might pop up in the future, and by being professional you’re more likely to be remembered and contacted again for future projects.

10. Don’t worry about what other people think. You might cringe at the idea of your parents reading about references to your foo-foo or colleagues knowing all about your multiple miscarriages, but it’s important to remember why you started blogging in the first place and write for you and your target audience.

11. Going self-hosted was the best thing I ever did. Registering www.crummymummy.co.uk was a turning point for me, both personally and financially.

12. Blogging conferences get lots of criticism, but they can be a great way to help you focus on your goals, hone your skills and meet lots of other like-minded people.

13. Most people have no idea what it is you actually do. No matter how many times you explain it, and where your income stream comes from, people still don’t really understand what it is a blogger does and how you earn your money.

14. Sometimes my blog feels like the monster I created. When the hamster wheel of post planning, writing and promoting all gets a bit much it’s so important to take a blogging break from time to time.

I could go on and on, having not touched on the amazing people and fellow bloggers you ‘meet’ online and the great communities there are as a result of linkies, but I’ll stop there (I was mainly trying to get a ‘4’ in the title of this post, but 4 things seemed too little and 40 too much, so 14 it was!)

If you’re a blogger what have you learnt since you’ve been blogging? I’d love to know!